Over the last few years we’ve seen many sites try to merge social networks and shopping, but nobody has really cracked the nut yet. Today sees the launch of a new startup called Mertado that’s taking a different route than most online retailers: rather than try to integrate social features into a retail site, it’s offering a store that’s actually built on Facebook Platform and Facebook Connect, and it’s looking to use the social graph to its advantage. Mertado was part of the most recent batch of Y Combinator companies, and drew interest from investors even before Demo Day, closing a round of over $1 million led by Redpoint Ventures, Blumberg Capital, and Stubhub founder Jeff Fluhr

Mertado offers both a Facebook application and a standalone website that uses Facebook Connect. Once you’ve signed up, the service will regularly suggest new deals to you, using information gleaned from your Facebook profile to identify exactly which deals will be most appealing (on any given day it might have ten deals, but it will only suggest the ones it thinks you’ll like). Mertado’s founders say that most deals are at least 50% off of the MSRP. Some deals will continue to drop in price as more people purchase them (and everyone who participates pays the lowest price), though there’s never a cutoff for a deal to become ‘activated’ the way there is on Groupon.

The service’s viral features are based on suggestions: if you suggest a deal to your friend and they purchase the item, both you and your friend will get a reward in the form of ‘Mertado Cash’ (you’ll still get the reward even if you didn’t wind up buying the item yourself). Mertado Cash are a virtual currency that you can apply toward future deal purchases. The only catch is that for some deals, you’ll only be able to use Mertado Cash to cover a percentage of an item’s purchase price (say, 20%) and you’ll have to use real money to cover the rest, though some deals won’t have any restrictions.

Founders Mehul Shah, Rajiv Bhat, and Vijay Chittoor say that the biggest differentiators of Mertado are its personalization and social targeting technology, which will learn what each customer likes over time so that Mertado can offer better deals. They also point out that Mertado is a standalone retailer, not just a deal aggregator, which means that Mertado handles credit card transactions, customer service, and returns themselves.

Mertado’s success will hinge, at least in part, on how accurate it can get its recommendations, and how often it can get users to share deals with each other. Because Facebook recently stopped allowing third party applications to use its Notifications channel, Mertado is going to have to rely on email to notify its members about deals, and there are already a lot of sites that do that. But there’s an opportunity here for a deal service that doesn’t just throw out low prices, but actually leads users to feel like they’ve stumbled across something serendipitous — to the point that they want to show it off to their friends. 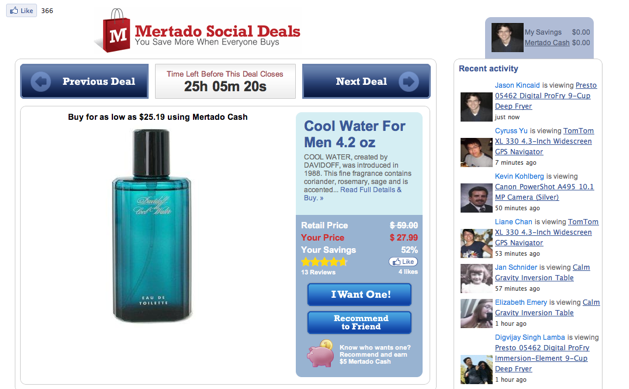