With f8 only two days away it’s going to be a big week for Facebook news— and the first wave of launches just hit. Today, Facebook is officially rolling out a new class of profile called ‘Community Pages’, which are meant to serve as a knowledge base of sorts for general topics like Yoga (see our full coverage of the new feature here). Alongside the launch of Communities, Facebook is making change that could lead you to become a fan of dozens of Facebook Pages in a single click.

When you first signed up for Facebook, the site walked you through a wizard that prompted you to fill in your favorite books, movies, interests, and activities. The problem, Facebook says, is that a lot of people don’t fill this section out or haven’t bothered to update their interests in years. Today they’re revamping the feature: your interests will soon link to their corresponding Facebook Pages. 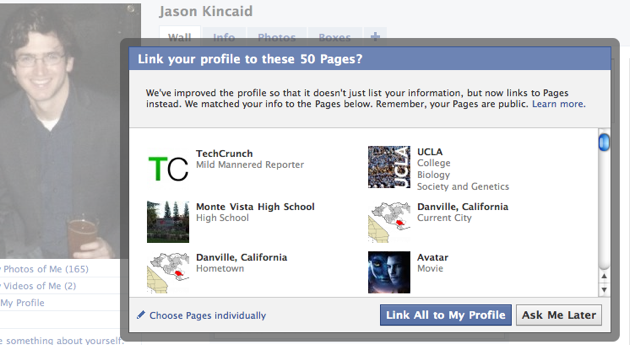 Next time you sign in to your Facebook account, Facebook will look at your entered interests, find the matching Facebook Pages, and prompt you to link these to your profile. At first glance you may only notice some minor changes: if you click on an activity listed in your profile it links to the appropriate Facebook Page, and mousing over these activities will show a hovercard so you can see how many other people have ‘Liked’ that page.

The big change, though, will be that updates from each of these Pages will now show up in your News Feed. And it means that some bands, brands, books, and movies are about to see a massive jump in the number of fans they have.

Facebook says that over three times as many users have ever ‘fanned’ a Facebook Page as have filled out their activities and interests. But there are still many millions of people who have filled out these areas. The Beatles currently have 2.1 million fans. I would not be surprised if that number jumps to 20 million, or perhaps much more, by tomorrow. I expect other popular entries — Halo, Harry Potter, Coldplay, and the like — to see similarly huge leaps.

If you’re not keen on following all of these Pages, Facebook is letting you manually uncheck the ones you don’t want to follow, and at the very bottom of the prompt (you really have to go looking for it) is an option to not follow any of them. Unfortunately Facebook is removing the ability to list an interest without having it tied to a Facebook Page, so your Interests section will be blank if you go this route. Another option is to become linked to these Pages, and then hit the ‘Hide’ button to ignore items they post to your News Feed.

One other thing to point out: historically users have been able to control who their activities and interests were visible to. They’re losing that ability today with the new changes, because Pages are considered publicly available information.