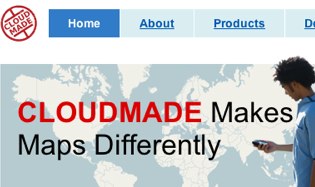 Many people describe CloudMade’s OpenStreetMap project as “Wikipedia for maps,” and they aren’t far off. The project allows anyone to add and edit map data around the globe, and the project is now a viable open and free source of mapping data for third party developers.

In some parts of the world, OpenStreetMap’s data is far more detailed than the data provided by TeleAtlas to Google and Navteq to Microsoft and Yahoo, for their respective mapping applications.

The number of contributors to OpenStreetMap has grown steadily over the years. A year ago 110,000 individuals had added or edited data. Today it’s up to 245,000 individual mappers. An average of 7,000 edits an hour are made to the data.

The project only started in 2004, and most of the data has been added over the last couple of years. Perhaps the most stunning case study is Germany. In 2007 it was a blank canvas. Today, the level of detail goes far beyond what any other service provides. It includes all major points of interest (even trees are now being added by users), the entire road network and turn by turn navigation: 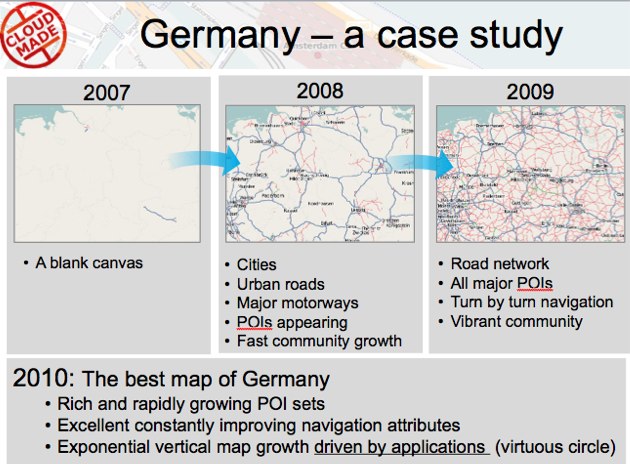 Third party developers eat this stuff up. There are few alternatives – Google, Microsoft and Yahoo will allow developers to embed maps into applications but there’s no deep dive into the data. CloudMade has allowed entire new classes of applications to be possible. In Germany 150,000 people have paid to download skobbler, which is based on data from OpenStreetMap. Countless other apps also use the data. One notably creative one – a gay cities app that shows the gay areas of cities around the world, with points of interest.

CloudMade adds paid services on top of the OpenStreetMap data that developers can choose to take or leave. And they’ve recently launched a location based advertising product that actually bring revenue to developers, too.

OpenStreetMaps is a triumph of properly channeled crowd passion. Most people add data for the love of the project, and together all those hundreds of thousands of people are bringing decent mapping data to places that the big guys won’t be focusing on for a long, long time.

If you’re an iPhone user (and who isn’t these days, you lemmings) and want to participate in the project, start here.