Over the last few months there have been non-stop rumors about Facebook finally launching its location feature (an announcement may well come at f8). But a startup called Glympse has already beaten them to the punch (well, sort of). The service now allows you to share you location with Facebook friends via the News Feed, using a nifty widget that plots your position on a map and updates it in real-time.

Glympse, which we first checked out last May, is a bit like Google Latitude in that it allows you to passively share your location with friends (as opposed to the check-in model popularized by Foursquare). But unlike Latitude, Glympse is for granting people temporary access to your location.

Say you’re going to be late for a meeting because you hit traffic — instead of giving your coworkers a ballpark estimate of when you might possible get to the office, you can send them a Glympse, which lets them track your position and ETA for a limited amount of time (you might set the expiration to, say, an hour). Once that Glympse expires, your coworkers can’t see your location any more. This way, Glympse avoids many of the issues with always-on location services (namely, the fear that you might accidentally share your location when you didn’t want to).

Glympse has offered this functionality for a while, but the integration with Facebook looks quite well done. Previously when you shared a Glympse link with someone it would just redirect to the Glympse site (this is what happens when you share to Twitter).  On Facebook, the service will now embed an interactive map that continuously updates. And you can use Facebook’s Friend List feature to specify who can see the map.

Glympse got some other good news recently, when Steve Jobs announced that the iPhone will get multitasking with its next OS upgrade. That’s a big deal, because up until now the iPhone version of Glympse has been crippled — if you closed the app, you’d no longer be able to update your location. The upgrade should remedy this issue for Glympse and many other location-based services. 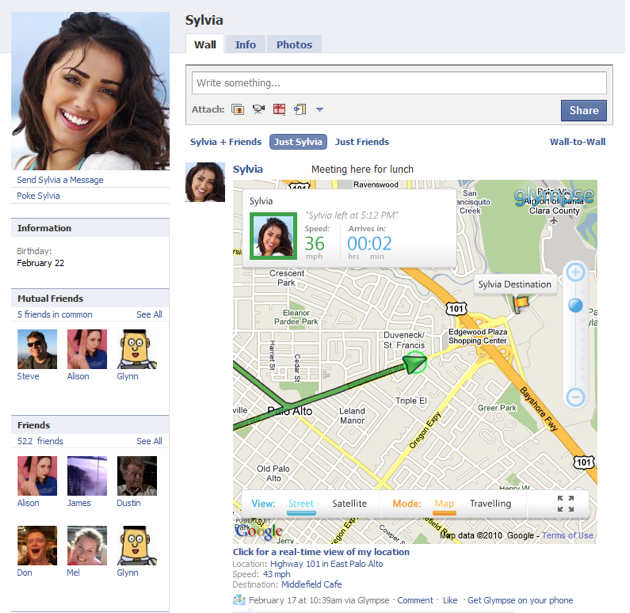