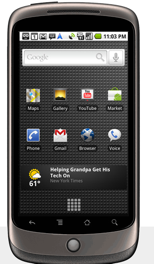 At Twitter’s Chirp conference today, Evan Williams announced that the microblogging network would be launching an Android app. It’s unclear whether Twitter will acquire an existing app (like it just did with Tweetie), if the company will partner with a developer or mobile device maker (as it did with RIM for the BlackBerry Twitter app) or if it will develop the app themselves.

Last Saturday, Twitter acquired Tweetie, the very popular and highly polished Twitter application for the iPhone. The application will now be called “Twitter for iPhone, ” and will be free. And on Friday, Twitter announced that RIM’s new BlackBerry app would be an “official Twitter app” for the device.

These announcements came after investor Fred Wilson wrote a post telling Twitter start-ups to stop filling holes in Twitter’s products and to instead look to launch killer apps that start entirely new businesses. That led some third party developers to question if Wilson was hinting that Twitter may start filling in these holes itself, displacing third party apps with official ones (he later said that while he was on the Twitter board, he didn’t know their plans). Twitdroid and Seesmic’s Android app are among the most popular Twitter clients for the device.