Now that Twitter finally revealed details about its plans to launch advertising with “promoted tweets,” people on Twitter are reacting. Not surprisingly, most of them don’t like the idea of ads being inserted at the top of their Twitter search results and eventually into their personal Twitter streams. According to Twitter Sentiment, 71 percent of tweets that contain the hashtag #promotedtweets are negative. One typical reaction from Twitter user Reva Grover:

Noo! Twitter, I thought you were different. I hate that you are selling out #promotedtweets

But what did she or any of us expect? She’ll get over it. The bigger question is whether or not these ads will work, will the ads themselves resonate with people enough to make them click on them or start following the companies promoting the Tweets?

Twitter will give each ad a “resonance” score, which is similar in concept to the quality score Google gives to search ads. The more people click on a link in an ad, retweet the ad, or follow the company promoting it, the higher the score. (How easy is that going to be to game? Just create tons of accounts and start retweeting your own ads.) As with most ads, many of these will turn out to be spammy and annoying. But some advertisers will figure out how to get consumers to respond and even find their most loyal customers.

Quite frankly, counting impressions, clicks or retweets isn’t all that interesting. And there is nothing to indicate so far that clickthrough rates or other conventional advertising metrics will perform any better on a promoted Tweet than in a search ad. My guess is it will probably perform worse because there are just so many more commercially-oriented searches on Google than there will ever be on Twitter.

But there is something you can do with these ads that you cannot do with any other type of ad other than email newsletters. You can start following the advertiser and subscribe to the company’s marketing messages. Why would you want to do that? If the company uses promoted Tweets to actually connect with consumers and give people a reason to follow, it could help with brand loyalty and at least identifying a company’s most rabid consumers. Such conversational marketing is easier said than done. Most advertisers don’t have the patience to engage in real conversations with their customers.

Many, however, are trying to figure out how to be more nonchalant and pretend like they are not trying to sell you something. At some point, Twitter could start measuring how many followers are coming through promoted Tweets and start charging more for those than they do for mere impressions. And then they could start measuring clicks from followers versus non-followers to prove that followers are indeed worth more.

First, though, Twitter has to ease users into the idea of now seeing ads in their streams, which is why it is starting with search results. It will soften the blow for when they introduce them into people’s personal streams. 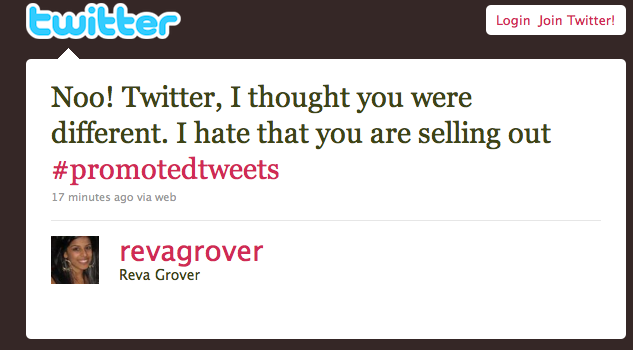