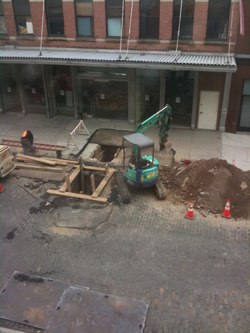 Twitter investor Fred Wilson’s post about too many Twitter developers simply “filling holes” instead of building killer apps became somewhat literal today. The company that has probably funded more hole fillers for Twitter than anyone else – Betaworks – has a huge hole outside of their office in New York. And that’s a picture of that hole.

OATV partner Bryce Roberts took the picture this morning while he was at Betaworks for a Bit.ly board meeting, and tweeted about it. “Yeah, I took that while I was in their office this morning for our bitly board meeting. Don’t make me regret posting it!” he said in an email.

Too late for that. Funny enough, Bit.ly is one of the hole fillers that Wilson pointed out – a URL shortener. As are many other Betaworks investments like Tweetdeck and, probably, Tweetup.

I say keep filling those holes, Betaworks. Your Summize hole-filler brought in a ton of Twitter stock, we heard. Maybe some of your newer investments will, too.