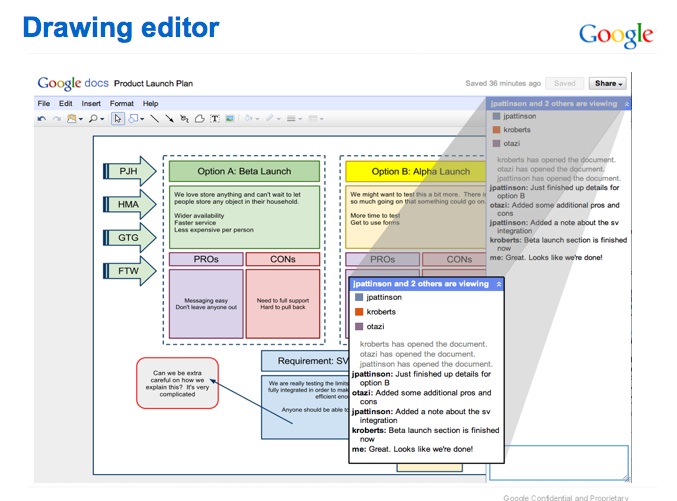 Slowly but surely, Google keeps trying to chip away at Microsoft’s core Office productivity suite with Google Docs, its free online word processor, spreadsheet, and presentation software. Today, Google Drawing is being added to the mix and Google Docs and Spreadsheets is getting a major realtime update. Both are being announced at Google’s Atmosphere event.

Google Drawings is not really a drawing app, it’s more of an online whiteboard. The app is designed to help people visualize ideas through flow charts, diagrams, and stencils. There is a chat window where participants can chime in. Images can be imported and moved around. But sadly there is no freehand drawing option. Google Drawings is best experienced in an HTML5 browser (Chrome, Safari, Firefox, IE9 if it supports SVG). Google Docs will also be discontinuing offline access via Google Gears on May3, and will bring it back later via HTML5.

The real news, though, is that Google Docs and Spreadsheets is getting more realtime. There has always been a noticeable delay when new edits get saved and synced up, especially when more than one person is working on the same document. Google is addressing this delay with an entirely new architecture built from the ground up.

Instead of waiting a few seconds to see the new sentences or spreadsheet figures someone else entered onto the doc you are both working on, you will now be able to see each change in realtime as each character is typed in. Google’s engineers developed a new Javascript layout engine which sits on top of the browser and allows realtime editing, faster overall responsiveness, and new features such as the ability to drag-and-drop floating images through a document while the text rewraps itself around the image on the fly. “Working on documents should be as easy as having a conversation,” says Goggle Docs product manager Anil Sabharwal. Users will need to turn on the new features in settings in order to see them.

Google Docs still lags Microsoft Office in features, but tries to make up for that by being a better way to edit and share docs and spreadsheets collaboratively among co-workers or anyone else. The key is to make it feel as responsive as a desktop app, even though it is in the cloud. During a briefing, Sabharwal showed a slide comparing the two, with check marks next to all of Google Docs’ supposed advantages (realtime multi-user editing, IM, storage in the cloud, mobile web access, no patches or updates, free with Google Apps).

He also showed the slide below, which is more conceptual than anything else in that it is not based on any data. But it does illustrate how Google thinks about attacking Office from below and winning over time by becoming a better collaboration tool. What I love about the chart, though, is that it places Google Docs in 2010 at just below Office 2003 in terms of an individual authoring tool. Of course, Microsoft is also moving to the cloud with Office 2010, and I’m sure they can make marketing charts which look very different. 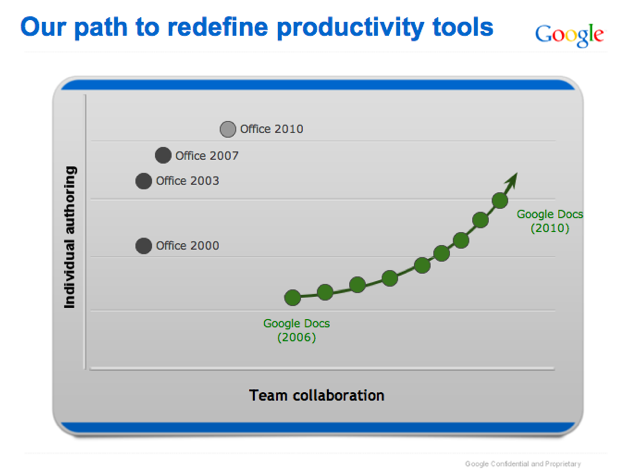