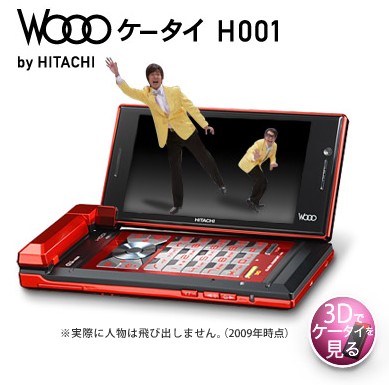 Sony, Panasonic, NEC and now Sharp: All of these Japanese tech powerhouses are playing the 3D game now, but what about Hitachi? The biggest (sales-wise) of them all has been working on a glasses-free 3D projection system and sells a 3D cell phone in Japan (pictured), but Hitachi has been relatively quiet in terms of 3D.

Today, however, Hitachi Displays announced [JP] the development of a new 3.1-inch 3D LCD, which is – you guessed it – specifically designed for mobile devices.

3D images produced by the parallax barrier-based IPS panel can be viewed without glasses. The display features a 480×854 resolution (which Hitachi calls “FWVGA”), 1,000:1 contrast ratio, and 400cd/m2 brightness. These specs (almost) put the Hitachi panel on par with the 3D display Sharp announced a few days ago. The Sharp model has the same contrast ratio and resolution, but it’s bigger (3.4 inches) and brighter (500cd/m2 brightness).

The interesting question now is whether Hitachi (and not Sharp) might be providing this new display for Nintendo’s portable 3D gaming system 3DS when it comes out later this year (it’s not a touchscreen though). Both companies have been delivering displays for the first-generation DS (and all generations after that): Sharp began in 2004, Hitachi followed one year later. We’ll probably find out in June when Nintendo shows the 3DS at the E3 game conference in LA.