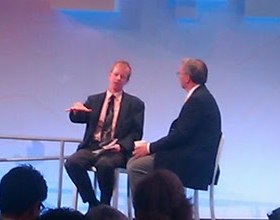 Earlier this evening, Google CEO Eric Schmidt took the stage at Atmosphere, a special event where Google and an array of speakers presented new cloud technologies to CIOs. Quentin Hardy, National Editor of Forbes Media, conducted a one on one interview with Schmidt, which was followed by audience questions.

The discussion covered a range of topics, including the security threat from China, Chrome OS, and Google’s future. Some key takeaways: Schmidt says that while many people associate Google with search, it’s fundamentally an information company, which is why it has undertaken initiatives in the enterprise, the browser, and mobile. He also says that despite the growing number of incoming information streams, there’s no such thing as communication overload (just watch a typical 18 year old, he says).

Schmidt also underscored a theme that’s grown increasingly apparent over the last few years: the future of computing is mobile. Schmidt says that businesses should have their best developers working on their mobile applications. He also says that the interoperability and security of mobile devices will be key factors for large businesses a few years down the road.

Below are my live notes from the interview:

Q: How did Apps come to be an important part of the company?

Q: Why take these computers you’re making out to world? Why take your eye off the ball of your core competency search?

A: People think of Google as a search company, but we’re really an information company. What’s interesting about these web apps is that you can do these sharing applications now. One of the new things about the web is that it enables sharing-sensitive apps. I think calendars are boring.. but I’m wrong. Because they’re shared quite often, people share their calendars quite a bit; spreadsheets are the same way.

A: The key insight in these architectures is that you can have open exchange data interfaces. Applications are no longer these monolithic applications.

Q: The nice thing about large IT apps…
A: Late, complex, inflexible, or did I miss something?

Q: Who is an interesting player here?
A: The goal here is to serve the customer. Everyone here has a multi-platform solution. All of us, including Microsoft, are trying to move to new web model.You have to try. There are limitations. Our applications are not full replacements for the incumbents, we’re clear about that. The strategy is to get to 80%, because of our cost benefit is worth it to switch because we’re providing value. We have a couple million enterprise customers for Google Apps. Adding around 3000 businesses a day (typically small). Large businesses a couple times a week adding 20-30k people.

Q: When you’re at scale, what are some of the things you’re seeing?
A: The most interesting things are the ones you didn’t think about wanting that you now want because of the web’s inter-connected sharing model. Virtually everyone here has very specific document retention policies. And yet most of the systems in place are fairly restrictive. There are a lot of applications that can be build on web servers. Google App Store growing very quickly. Our best strategy is to provide interoperability, authentication, and then the third parties build the applications.

Q: Let’s spend a minute on the future. On the product, inside the corporation. What kind of relationship you want with businesses, and your work with news computers, Chrome OS, the tablet.
A: Hopefully someone else will be making the devices, we do the software. What’s important now is to get the mobile architecture right. Because mobility will be the way you will provision in the future. Fast forward 5-10 years. The answer should always be mobile first. You want to have the best app on mobile. If the real action is going to be there, then making sure you know what’s going on with mobile devices within the firm, they’ll want interoperability and safety.. For us the single most significant moment has been the arrival of HTML5. This standard allows for store value within the browser. Allows for application segregation. Means that applications will be less virus sensitive. The promise of Chrome and Chrome OS is that the devices you give to employees will have 2 second boot time, will be disposable, low price.

Q: What’s it going to cost?
A: It will be up to the manufacturers. Think about the current net book prices, which are around $300-400. Chrome is free.

Q: IM video, voice. Is there such a thing as overkill in communication?
A: No. You’re obviously not young enough. Watch an 18 year old. One of the questions you want to ask, is, “what is new?” One thing that’s really new, is that everything is now. What you’re really referring to is not necessarily that you have so many parallel streams, it’s that they’re all right now. With a modern data connection and powerful computer you can work anywhere. What is fundamentally different now is everyone knows what’s going on exactly now. Everyone with a digital device. If you turn off digital devices now, you take away something pretty profound. That connection is so fundamental to peoples’ lives today.

Q: As CEO, what are you doing to help create spirit of innovation, culture of dot com environment. What are you doing to keep the spirit alive?
A: The culture is determined not by the CEO but by the people. We work hard to run the company with a set of values.. it’s all about the people and the selection of people we bring into the company. Bring in a narrow set of people and they tend to stay. We’ve tried to stay away from focusing on competitors. We’re focused on end user solutions.

Q: You alluded to breach/near breach with ‘advanced persistent threat’ (China). Are there security lessons you can share?
A: When we were attacked we faced a moral question. Most companies would be embarrassed.. we decided we had to tell people as a warning. There was evidence of tracking of human rights activists, and there was lots of coverage after that. We have not gone into the specifics of the attack except that ultimately it was publicized that it was a vulnerability in IE6. Simple advice: make sure that you’re using the latest versions of operating systems and browsers. We ultimately believe the web platforms we’re building over the last year will be inherently more secure (Chrome, Chrome OS).

Q: How do you see Google on the ground level, in those areas where despite conditions everyone has a mobile phone?
A: We see ourselves as platform provider not content providers. One of the thing I’m most proud of in the next few years, more than a billion people will get mobile phones who have never had a mechanism of communication outside of their village. Outside of the US we’ve worked hard on SMS search. Also have a feature phone focus around these browsers. Most people in the future will access internet mostly from mobile device.

Q: Where do you see Google in 3-5 years?
A: We’re growing so we’ll have more people and operations. We will be a larger company, a larger footprint. In search, there are a lot of things in the web that are close to AI. Google Googles, automatic page translation in Google Chrome. That kind of technology is as close to magic as I can imagine. We’re close to moving this information explosion to the next level. We operate with the assumption people will carry with them a mobile device with them at all times, and that there are applications we can build/people will build on our platform that will allow people to be more productive, more fun.

Q: Warren Buffet says that when you acquire great wealth you find yourself in more interesting circles/situations. What are 1-3 things you’ve learned that have knocked your socks off?
A: I was surprised at severity of financial crisis. I was surprised that so many smart people knew so little about what was going on. I wanted to work on helping fix that, it’s fundamentally an information problem. I’ve been working on advanced manufacturing issues in the US as well. That’s another surprise, the decline of American manufacturing.

Q: Could you give me a thumbnail report of Google?
A: We make lots of mistakes. One weakness is that as we become more middle aged as a company it’s harder to do completely new things. Now because of constraints… Every government has a group trying to figure out what we’re up to. Information is power. The fact of the matter is that we’re disrupting industries. Most of the other large companies have collaborations as well as competitions with us. My basic objective is to find out how to grow these industries.

Q: I’m from the Pentagon. I listened to Alan and Jeff speak about public, private cloud. What do we need to do to engage more to become more successful in gov/industry partnership?
A: It’s a hard answer. The structures are completely different breed than the consumer market. I would observe that in non-classified parts of gov, the needs are almost identical to consumer side, with collaboration, cheap, reliability, etc. With respect to specifics, let’s work together on this.

Q: What do you think are great skills/talents/areas of study these leaders should seek?
A: Most of it has to do with curiosity. People my age often don’t ask the fundamental questions. When people say things to me, I actually check every one of them. I would encourage you to challenge every assumption. Larry/Sergey would challenge every assumption I made. Your employees will respect you if your’e on top of the details at that level. We run Google in collaborative way. We sit in rooms until the best idea comes and everyone agrees on it. Finally, there are some very smart people in your organization that you don’t know about. The ones who are low in the org, they’re probably miserable. They’re often deep, three levels down, look for it and when you hear it jump on it.