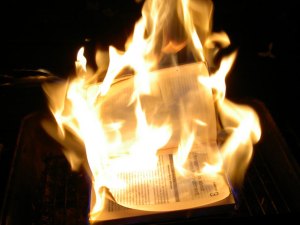 For one reason or another, I’ve spent the past few weeks down at the TechCrunch offices. As a result, it’s proved almost impossible to avoid iPad fanboy hysteria. Mike has already said that the device “beats even my most optimistic expectations”, Jason was one of the first in line at the San Francisco launch and even Sarah – who until now didn’t have an iPhone – has succumbed to its charms as a work/play device for long-haul travellers.

And then there’s me.

No. Strike that. I am convinced. And that’s what worries me.

As I’m contractually obliged to never let you forget, I write the occasional book – and as such, I have a vested interest in the future of the medium, both in print and in digital form. One of the labels attached to the iPad – along with laptop killer and television killer – is Kindle killer. Why, the argument goes, would someone buy a dedicated e-reader devices for (low) hundreds of dollars when for (high) hundreds of dollars they can have a device capable of displaying books, movies, web pages and just about anything else?

It was a question, frankly, not worthy of an answer. Or at least not one that wasn’t accompanied by a roll of the eyes. Almost everyone who described the iPad as a Kindle killer chose to ignore the fact that no matter how nice and shiny Apple’s screen technology is, it’s still not designed for reading books. Without e-ink, such as that found in the Kindle, your eyes get tired after a few pages – which is fine for replacing a newspaper, but is basically useless for a book. I wrote as much back in January.

“Just wait and see” said the fanboys, “wait till you get your hands on an iPad before you jump to judgment.”

Well I waited, and now I’ve spent long enough playing with an iPad to jump to judgment. And you know what? The fanboys were right. The iPad is a Kindle killer, but for all the wrong reasons.

Let’s finally put to rest the myth that the iPad is a good way to read books – it isn’t. Without e-ink – who’d have thunk it? – your eyes get tired after a few pages. You find yourself wishing you could print out the rest of the book and read it properly, away from the screen. Even the way that Apple displays books – in their Delicious Library rip-off way – suggests that they consider books to be just another kind of app. Something to fire up, play with for a couple of minutes and then swap out for the next five minutes of Flight Control.

The iPad is emphatically not a serious readers’ device: the only people who would genuinely consider it a Kindle killer are those for whom the idea of reading for pleasure died years ago; if it was ever alive. The people who will spout bullshit like “I read on screen all day” when what they really mean is “I read the first three paragraphs of the New York Times article I saw linked on Twitter before retweeting it; and then I repeat that process for the next eight hours while pretending to work.” That’s reading in the way that rubbing against women on the subway is sex.

And yet, and yet. There’s no doubt that the iPad is a beautiful device for almost everything else. It’s perfect for reading newspapers – Alan Alan Rusbridger’s space-filling fanfic not withstanding – and it’s perfect for email and web browsing and movies and games. If you have to carry around one device – for your commute to work, for an hour in a coffee shop, or on a long-haul flight – then the iPad is the one to carry. Which is precisely why I’m so worried for the future of books, and for reading.

For a few months, the Kindle – or the Sony Reader, or whatever e-reader floated your (Three Men In A) boat – was the perfect take-anywhere device. Sales of ebooks soared as first early adopters, then everyone else, left their paper books at home and started carrying around something smaller and lighter that still gave them access to their reading material.

Those same people are now the ones who will buy iPads, or presumably any one of the myriad alternatives that will soon be flooding the market. But those people don’t want to carry around two tablet-shaped devices to help pass their commute, so they’ll make the sensible choice and leave their Kindles at home. Sure, the Kindle is unarguably the better reader device, but what many booklovers (myself included) have arrogantly overlooked is that it’s not competing on a level playing field with other e-readers. It’s competing against the whole universe of portable entertainment. “This ebook hurts my eyes – I’ll just surf the web instead.”

Even for those who love books enough to persevere with reading without e-ink will soon face another problem with the awesomeness of the iPad. The device does so many different things so well that there’s a constant urge when you’re using one to do something else. Two or three pages into a book, you’re already wondering whether you’ve got new mail, or whether anyone has atted you on Twitter. One of the joys of reading is to be able to shut yourself away from distractions and lose yourself in a book. When the book itself is packed with distractions, the whole experience is compromised.

The first effects of this – I suspect – will seem like great news to publishers, who are increasingly frustrated by Amazon’s control over the ebook market. Having made a mental and financial commitment to their iPads, readers are unlikely to retreat back to their Kindles when their eyes start to hurt trying to read hundreds of pages on Apple’s device. Instead they’ll return briefly to physical books to scratch their long-form itch. They’re still portable, affordable and readable – and carrying one with you doesn’t feel like wasted space in a way that carrying a Kindle and an iPad would. Physical book sales will rise, Kindle sales will drop.

Soon though, especially as more and more commuter friendly apps appear on the iPad and publishers push out more video content to further distract us from the need to read for prolonged periods, the idea of carrying a book will go back to seeming unnecessary.

And at that point the iPad will indeed have killed the Kindle. But, for millions of casual readers, it will also have killed something far more valuable: the experience of reading for pleasure.