Today, millions of people around the world were introduced to TEXTp, a new video display format created by YouTube that converts the site’s videos into a flurry of ASCII characters. The new format, which was implemented as a cost-saving measure, is saving YouTube $1 per second of content watched in bandwidth costs.

Of course, TEXTp is just the latest April Fools prank to come from YouTube (past pranks have included Rick Rolling all of its users and flipping the site upside down). Yesterday, I had a chance to sit down with some of the people behind this year’s prank. Along with explaining how they actually got these ASCII-ized videos working, they also detailed YouTube’s process for figuring out which pranks get shown to the world. Be sure to check out our full list of other April Fools jokes here. 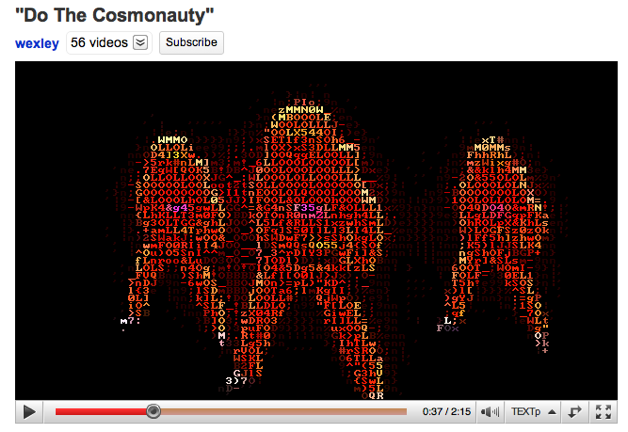 So how did YouTube convert all of its videos to streaming lines of text? The company leveraged a piece of its existing and seemingly unrelated technology: their 3D video player. Engineer Peter Bradshaw, who is behind the site’s 3D viewer, says that fellow engineer Blake Livingston adapted his work with Adobe’s Pixel Bender (which is used to achieve the 3D effect) to convert the videos into ASCII.

Billy Biggs, another software engineer at YouTube (who claims pranks are his full time job), also played a key role in the project. Bradshaw initially hacked the effect together in one evening, but it took around three weeks for the prank team to get that ‘last 10%’ done.

The pranksters say that the idea had actually been circling at YouTube for over a year, and that there were many other pranks proposed. In fact, each YouTube employee is invited to submit their idea in the months leading up to April 1. To choose which one is actually deployed to users, YouTube uses Google’s Moderator tool. After voting concludes, a smaller panel made up of engineers, product managers, and PR reps congregates to figure out which ideas are feasible (and won’t offend anyone).

The prank team didn’t take this too lightly, either: as I left the the conference room yesterday afternoon, the team was still tweaking TEXTp, trying to hone in on the optimal font size and color palette while waging a war against the letter ‘M’, which had the nasty habit of showing up too often.

If ASCII art is your thing, you may also be interested in ASCIImeo, an ASCIIized version of Vimeo.