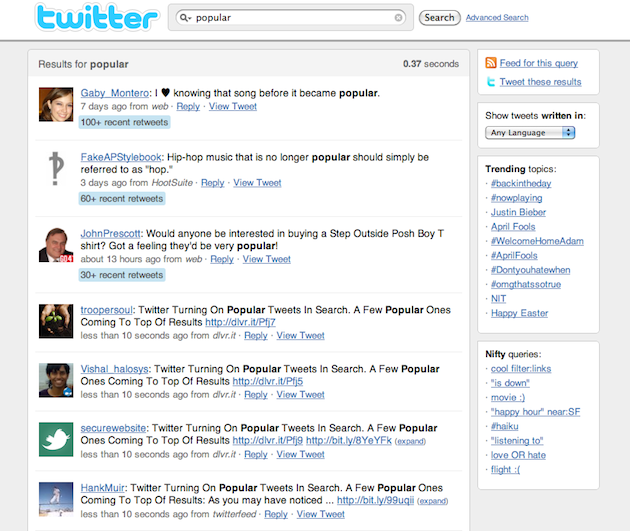 As you may have noticed when Twitter introduced its new homepage a few days ago, Twitter has a new feature that allows them to group together popular tweets. They say this is done algorithmically, and have an account to capture them all here. Now they’re just turned on this feature on for Twitter search, and its API.

As you can see in the search.twitter.com page (but not yet on Twitter.com’s own search), there are three pinned popular tweets at the top of the results (Twitter notes that it could be less than three, but that three is the max right now). Below each of these, you can see the number of times the tweet was retweeted, giving some indication of why it’s popular.

A message today sent from developer advocate Taylor Singletary to the Twitter development and API Google Groups lets everyone know about the change. He also seems to reveal the keys behind the popularity algorithm:

With this new project, we want to make real-time search even more valuable by surfacing the best tweets about a particular topic, by considering recency, but also the interactions on a tweet. This means analyzing the author’s profile, as well as the number times the tweet has been retweeted, favorited, replied, and more. It’s an evolving algorithm that we’ll be iterating on & tuning until practically the end of time.

Further, this search change is coming to the API too. Singletary says this feature will be opt-in for developers during this current phase. But it sounds like eventually this will be a standard part of the search API (that undoubtedly developers can choose to leave out if they want to). Here’s how the results will break down for those who do opt-in:

To make this new feature work, each tweet now has a new bit of metadata letting the search query know if it’s “popular” or “recent.” Singletary also notes that in the future other metadata layers may be added to further augment results.

That seems like a pretty interesting way to make Twitter search more useful and less filled with spam.

Update: Twitter has now added popular results to Twitter.com as well. Check out the screenshots below — it’s less obvious than search.twitter.com but the metadata is there. 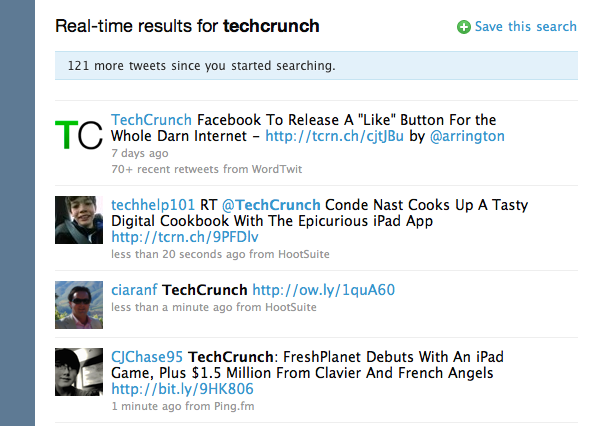 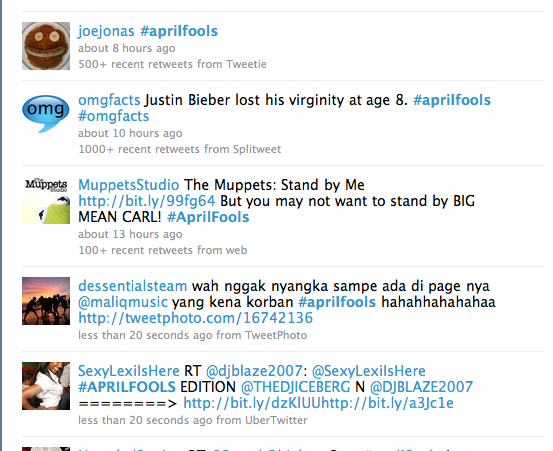