SharesPost, a private equity market that allows employees and founders to convert some of their shares into cash launched a publication platform to include reports that give greater insight into the valuations of companies like Facebook, Twitter and LinkedIn. We examined last year’s report, which estimated Facebook’s valuation between $4 to $6 million. Today’s report pegs Facebook’s valuation at around $9 billion, which is higher than last year’s number but lower than the $10 billion valuation the social network earned during its latest funding round last year.

The report, which is you can access here, estimates Facebook’s current valuation between $8.4 and $9 billion after using two methods of analysis comparing revenues with steady-state enterprise valuation ($9 billion) and comparative enterprise valuation ($8.4 billion). The steady-state valuation estimates use a 25x market multiple and normalized net margins of 30%. Assuming that Facebook will make $2.5 billion in 2014, the report arrives at a target 2010 enterprise value of $9 billion. For the comparative valuation, the report uses a secular growth rate of 25% and EBITDA margins of 50%, to arrive at a conservative valuation of $8.4 billion (assuming the company’s revenue to be $1.3 billion in 2011.) 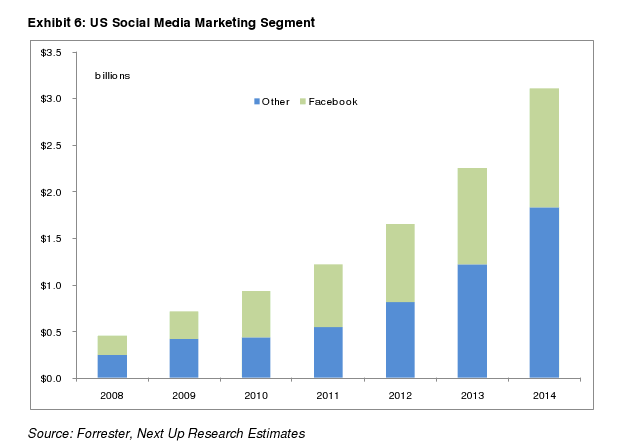 SharesPost’s report estimates that Facebook is currently burning through $200 – $300M of cash a year for its operational expenses and for capacity expansion, and is cash-flow positive, which we knew. The report highlights Facebook’s 400 million users and its dominance as the world’s largest social network, wide network of developers building off the platform, and the amount of ecommerce and advertising revenue flowing through the network. For example, Zynga spends between $5 million and $8 million per month on advertising on Facebook. The report estimates that Facebook’s revenue for 2010 will hit $1 billion and nearly $3 billion by 2015, another stat that we’ve heard before.

SharesPost also released a report on the valuation of Twitter, estimating that the microblogging network is worth $750 million. Strangely, SharesPost’s recently-launched Venture-Backed Index has Facebook’s valuation listed at nearly $12 billion. We’ve contacted SharesPost for comment on this discrepancy.