Today at the Rosewood Sandhill Hotel in Menlo Park, CA, Kleiner Perkins Caufield & Byers hosted an event surrounding a “mobile content revolution.” The famous venture capital firm was tight-lipped about what this event would actually be about, but the speculation leading up to the event was that it may involve Apple’s new iPad, which is being launched in the U.S. on Saturday. Sure enough, it was.

Kleiner Perkins today announced the doubling (or “doubling down” as partner John Doerr put it) of its iFund to $200 million. Initially, this includes more than a dozen iPad applications due in May from portfolio companies. In March of 2008 as Apple was unveiling its iPhone SDK, Kleiner Perkins unveiled the first iFund, a $100 million fund to spur iPhone app development.

iFund portfolio companies at the event included Booyah, Cooliris, GOGII, InMobi, ngmoco, Pinger, Shazam, shopkick, and Zynga. In total, there are 14 ventures in the iFund now, 3 of which are in stealth mode. “They’re kicking ass,” Doerr notes.

In fact, the iFund companies have produced apps that have seen 100 million total downloads, Doerr notes. And those companies are expected to pull in some $100 million in revenues this year. Four of the companies are already profitable, partner Matt Murphy notes. The problem is that with the success, the iFund is out of money — Kleiner Perkins actually raised an additional $330 million to pump into these companies outside of the initial iFund investment. And there’s this new device coming out…

“On the eve of the iPad, the iFund is out of money,” Doerr said. Hence, the doubling of the fund.

There are over 20 applications for the iPad currently in development under the iFund. 11 of those will launch on Saturday with the iPad itself. Doerr seems particularly excited about one of the stealth ones (which he wouldn’t talk about specifically) that rolling out in 5 weeks, that will be iPad-only.

Below, find my live notes (paraphrased): 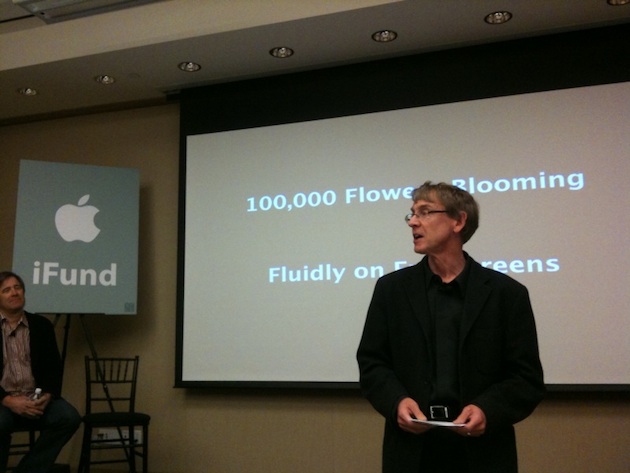 John Doerr: Just 15 years ago in 1994 there was no Internet. There was no browser. Steve Jobs had left Apple he was working on Toy Story and NeXT. That year I saw Mosiac, the first web browser. It was magic. The rest of the 90s was a great experience. All those companies came around. Silicon Valley was a Florence of the

“It feels like Deja Vu all over again. Twice in a lifetime.”

A tsumani of cellphones have swept the world – now 3 billion have them. Including people in far reaches of Africa. There are 75 times more cellphones in Kenya than PCs. In 4 years there will be 32 million cell phones there. Everyone is going to have the Internet and a cell phone in their pockets.

A few years ago Steve Jobs rocked the world with the iPhone. “If you can’t invent the future, the next best way is to fund it.”

There are 100 million downloads, and there will be over $100 million in revenues from these companies this year. We’ve raised $330 million raised for them. But on the eve of the iPad, the iFund is out of money. To quote Bill Campbell, “You’ve gotta have the fucking money.” So we’re doubling down the iFund to $200 million.

This Saturday the iPad arrives, we believe it’s going to rule the world. I’ve held it, caressed it. It feels like you’re touching the future (Doerr stole that from me).

We’re going into a brave new world. From the old world of Windows interfaces to touch. The swoosh of liquidity. The iPad is direct, it’s natural. WYTIWis — what you touch, is what is.

You’ve gotta have a cool name to be funded by Kleiner (laughs). We’ve seen what developers are working on so far, it’s fantastic. In a few days, you’ll see it too.

Doerr back on stage

100,000 flowers blooming. The tablet is where all these dreams are going to come true. This is going to start a third Renaissance in software. This will be a new interconnected, interactive world. This future will transform all fields (healthcare, etc). Over the next decade 3 times better battires in 10 times better powered chips. You’ll have a terabyte of local fast storage soon.

I’ve always been awed by entrepreneurs. Let’s talk to the guys working in the iFund. 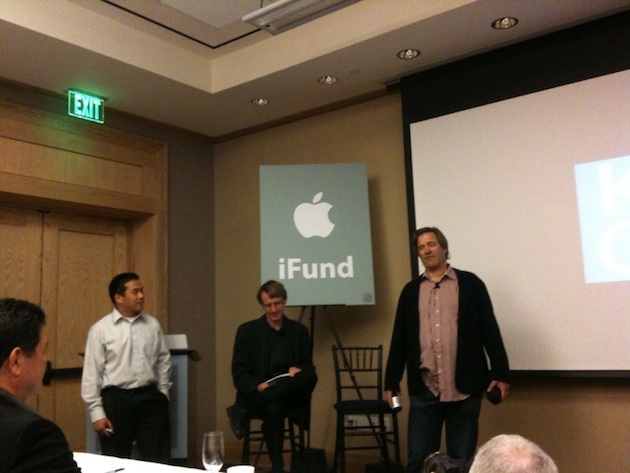 I have no prepared remarks. Twas the night before iPad – nothing was stirring, except the whole family trying to throw away their mouse. I’m going to make a prediction. Many centuries ago the writing body language. 50 years ago, the typewriter body language. Then the iPhone body language. Now the iPad body language.

I’ve been with a lot of companies, nothing has been as successful as with the iPhone. We have paid apps and free apps. Many different business models – in app adds, in app purchases. We’ve done 13 titles, 10 have been in the top 100. Largely because we use our apps to sell other apps. If you’re not in the top 100 apps, it’s hard to be seen. We’re profitable – in a year, really in 9 months!

So the iPad: The strongest thing I can saw is that my daughter immediately knew she wanted one. We’re making Doodle Buddy for the iPad. The most fun you can have with your hand (rather than your finger (with the iPhone). 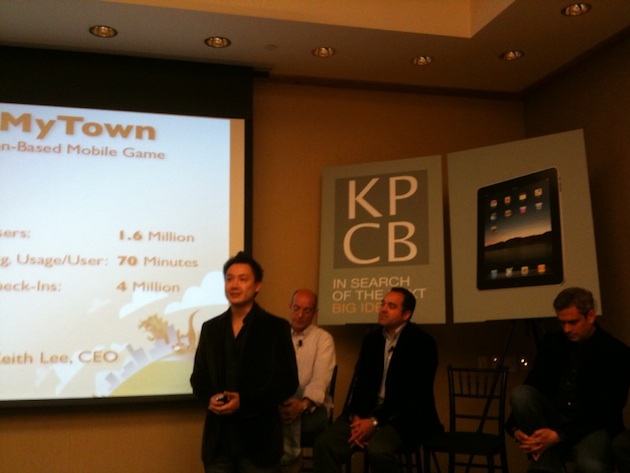 When we saw the iPhone, we knew we had to leave our jobs at Blizzard. Camera, GPS, this was huge for new experiences. 4 months ago we launched MyTown. It’s the most popular location-based social game. It’s realworld Monopoly. We’ve been able to hit 1.6 million registered users. 130,000 new users a week. We’ve always been in the top 50 of the charts. People spending 70 million a day (per user) in our game. We have 4 million daily check-ins.

We are in over 200 countries, we have 50 million users, we’re getting 750,000 new users added every week. There are 2 million tags a day. Over 15 million downloads on the iPhone. Had a top 50 ranking since we’ve been live in the App Store. And we’ll be on the iPad as well. It’s not just going to be a big iPhone app, it’s a new experience. You’ll see it on Saturday.

We believed the iPhone could revolutionize mobile gaming, and the iFund backed us early. We’ve have over 30,000,000 downloads of our software. We’ve had 15 top 10 (total) apps. We Rule is huge now. We run the plus network, over 20,000,000 downloads of those games. Every single day users play over 20 million minutes of ngmoco games.

The iPad will revolutionize gaming in the home. The iPad radically reshapes the way you interact with software. We’ll have 7 applications available at the launch of the iPad. All built specifically for the iPad. And yes, We Rule is coming to the iPad.

textPlus is a next generation messaging platform. It blows up the relationship between the telephone and text messaging. 15 million messages a day. 2 billion messages since our launch. Our users are using 65 minutes a day on average. 5.5 million users.

But the iPad will change everything – because it’s not a phone. It’s more like the iPod touch. The use cases have yet to be written and imagines. Text is a voice of a generation – other generations are coming with them. I think this new device will be huge for text messaging (again, without the phone part).

Zynga and Cooliris and Shopkick are also here to answer questions. We’ll do Q&A in a minutes. Gordon reading a poem about the iPhone (yes, really).

Q: How many companies in the iFund are profitable? Is the iPad a bigger opportunity than the iPhone?

A (Matt Murphy from overseas): 4 companies right now are profitable, we’re not disclosing which ones. Cash-flow profitable for sure.

The panel is split as to weather they’ll raise app prices for the iPad. Some will stay free, some won’t raise prices.

A (Neil Young): It’s early days for the iPad, there are 75 million iPhone (and iPod touch) devices out there. The iPad will engage users for more time than the iPhone we think. I think living room gaming is going to have some competition from the iPad. Same with desktop gaming.

A (Bing Gordon): I think the iPad market will be bigger than apps on the iPhone.

Q: Could the iPad be bigger than the iPhone?

A (John Doerr): I don’t know. I don’t know what apps are going to be built, but let me tell you about some I think about. I think every doctor and nurse will use an iPad. I don’t think we can anticipate the great new uses.

Q: Is there a bigger business opportunity for tablet computing in general?

A (Bing Gordon): The money from the iFund can be used for development on other platforms too.

Q: What percent of revenue will be from iPhone or iPad?

A (from the panel): It’s going to be most of it. The iTunes aspect is key, it’s a great infrastructure. Most of us are still a drop in the bucket in terms of how big we can grow. Apple has an incredible lead in the space right now. Calling the iPad a tablet is kind of like calling the iPhone a cellphone — it’s so much more.

Q: 2 years from now what percent of usages is on the iPhone?

A (Cooliris): We only have an app on the iPhone

A (Shopkick): Same with CauseWorld, majority is iPhone.

A (Zynga): Big and growing.

Q: What as the biggest surprise for developing on iPad?

A (from the panel): The first iteration of the SDK was really complete, which was great. The iPad is not a big iPod touch — that misses the point. When you’re playing with it, you forget you’re using something. You no longer think about the interactions you’re doing, you just do. You have to touch it to understand. Mobile software is built around, when you got a second, you use it. But the iPad is more of a lean-back experience. It’s clearly not a bigger iPod touch. The device is magic. It will change the way normal human beings feel about computing.

Q: So how long until the first non-iPhone killer apps?

A: Insider 6 months I think you’ll see the first of those. If you wanted to build the killer app for the Xbox 360, it would take you two years. For the iPhone and iPad, it can happen so quickly.

A (from Doerr): Within 5 weeks one of the stealth ventures is going to roll out an app that’s iPad-only. And quickly we’ll see education apps which will transform things.

Q: What about Apple’s closed platform versus the Android open platform?

A (Doerr): There are two different philosphies. The iPhone got there first, but each will make the other better. I don’t know which is going to win.

Q: Is there something in stealth with healthcare?

Q: Will there be many new ideas for healthcare?

Gordon: So thank you for coming over. That’s a wrap.