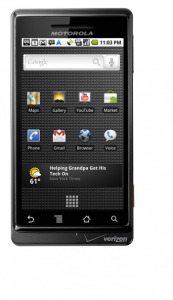 Unfortunately, it’s only been rolled out to around 8,000 Droids at this point — and considering that there are purportedly at least a million of these things floating around, that means the majority of people are still waiting for their update. Are you one of them? Fear not, friend! We’ve got all the details on how to manually update your Droid to the official, Verizon-and-Google-blessed build of Android 2.1.

All in all, it should take you about 10 minutes. There is no “hacking” required – your device doesn’t need to be rooted, overclocked, underpantsed, or what have you. This is the same package you’d be downloading from Verizon (it even comes from Google’s server!), just a whole lot sooner.

Here’s how to do it:

Bam! Download, rename, reboot, hold a button, done. Could it get much simpler? As soon as the upgrade process finishes, you’ll be Android 2.1’d up and ready to go.

[Much love to the guys at AllDroid for digging up the update file name, and to Nikolai for giving us the heads up]