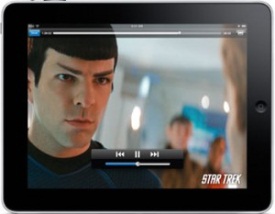 Everyone remotely involved with online video is quick to jump on the iPad bandwagon – we’ve recently covered announcements from the likes of Ooyala, Brightcove and Kyte. You can add two more to that list now, courtesy of Delve Networks and MeFeedia.

Delve Networks, for one, says it will support full video delivery when the tablet device lands in users’ hands on April 3rd.

Newspaper, magazine and online publishers who already use Delve to deliver video on the iPhone or iPod touch (the company also helps publishers reach audiences on Android and Blackberry phones) will automatically be able to deliver video to the iPad without further changes.

Their videos will automatically be encoded in the right format to be viewed through iPad’s player if the publisher inserts some lines of code on its website. Delve’s detection system will then decide the appropriate link to present to the viewer depending on which device he or she is using. Delve does not not require browsers to support HTML5, although the company says it considers HTML5 support to be a key component of its product roadmap.

MeFeedia this morning touted its ability for advertising on HTML5 videos, thanks to its All Player technology, which it says is patent-pending. MeFeedia claims the All Player platform powers over 50 million monthly video ads across web and mobile devices (including those that don’t support Flash – guess which ones they mean by that). You can view a demo here.