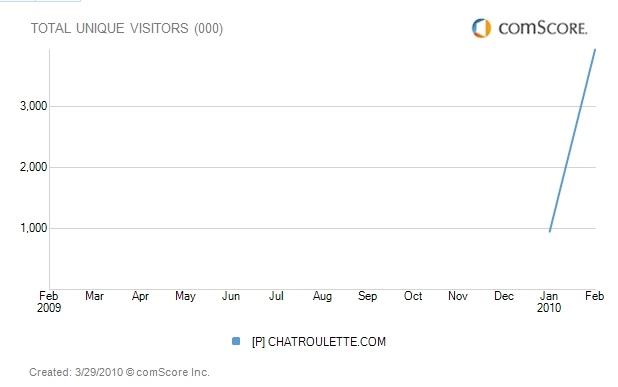 Whether it is all the media attention or there are just a lot of lonely people out there with a deep need to talk to strangers, Chatroulette is on a roll. In February, 2010, the young site attracted 3.9 million visitors worldwide, up from 944,000 in January, 2010, according to the latest data from comScore (see chart above). Google Trends for Websites shows a similar growth curve, with about 500,000 unique daily visitors.

The quadrupling of visitors measured by comScore coincided with the relatively new site being discovered by news sites and blogs.  It may just indicate the intense level of curiosity about the site, which matches random people together in a simple video chat environment. When you get bored (or creeped out) you can click to start a new session. Or it may be tapping into the basic human need to communicate. It gives “instant communications” a whole new meaning.

The site already had its Daily Show moment and is inspiring some viral videos like the now-famous Chatroulette piano improv guy, Merton (see below). Can Chatroulette keep growing, or is it a fad fueled by nothing more than idle curiosity?