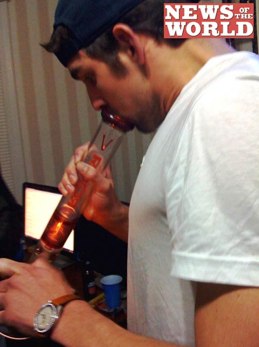 Trying to control, or even manage, your online reputation is becoming increasingly difficult. And much like the fight by big labels against the illegal sharing of music, it will soon become pointless to even try. It’s time we all just give up on the small fights and become more accepting of the indiscretions of our fellow humans. Because the skeletons are coming out of the closet and onto the front porch.

We’ll look back on the good old days when your reputation was really only on the line with eBay via confirmed, actual transactions and LinkedIn, where you can simply reject anyone who leaves bad feedback on your professional life.

Today we have quick fire and semi or completely anonymous attacks on people, brands, businesses and just about everything else. And it is becoming increasingly findable on the search engines. Twitter, Yelp, Facebook, etc. are the new printing presses, and absolutely everyone, even the random wingnuts, have access.

That picture of you making out with two guys in college up on Facebook. Or perhaps doing a bong hit after winning a few Olympic gold medals. The random slam against your restaurant anonymously left by the owner of the competitor around the corner. The Twitter flame about how bad a driver you are, complete with a link to a picture of your license plate.

And it’s about to get a lot worse. Next week a startup is launching that’s effectively Yelp for people (look for our coverage in a few days). If someone has something good or bad to say about you, they’ll be able to do it anonymously and with very little potential legal or social fallout.

We’ve seen services like this in the past. Rapleaf and iKarma come to mind. But they were flawed – Rapleaf now collects and sells data about people, and iKarma seems to be little more than a realtor focused service. Another service, Gorb, has vanished completely.

But something tells me this new service, or some other one, might succeed where the others have failed. We’re primed and ready now and have lots of experience publishing all those random opinions about people and things on Twitter, Yelp and Facebook already. It’s time for a centralized, well organized place for anonymous mass defamation on the Internet. Scary? Yes. But it’s coming nonetheless.

This has been on my mind for a long while now. Our minds haven’t evolved much over the last few thousands of years, but the spread of quick fire opinions is now moving at the speed of light and forever findable on the Internet. We’re still wired to think of gossip as something that spreads quietly behind the scenes, and relatively slowly. But we’re already in a world where it’s all completely public, there are few repercussions to the person spreading it, and it is easily searchable. No wonder people freak out. We’re fish out of water.

Sure, we’ve evolved a legal infrastructure to deal with libel, slander and defamation. Those laws worked well in an era of the printing press, and sort of stretched to cover radio and television. But they are as ineffective against the Internet as copyright laws are in battling music piracy.

Other services like Reputation Defender have launched to try to help people manage their online reputations. It can be somewhat effective unless your name gets into the press, which doesn’t back away easily from the stuff they publish. It’s relatively easy to bully someone into taking down that Twitter rant, or even that Facebook photo, with an official looking email or letter threatening legal action.

But it’s much harder to get that stuff off of services that exist to publish that information. Businesses freak out over a bad Yelp review but can do little to stop it. Imagine how you’ll feel when the top result for your name is a site that includes “reviews” of you by anonymous people who know you.

Sure, lots of feedback will be positive. But piss someone off at work and you’ll have “Sketchy and unethical in the workplace” pop up about you. And it will be there forever. Heck, your great-great-grandchildren will be reading it long after you’re gone.

So What Happens Next?

We’re going to be forced to adjust as a society. I firmly believe that we will simply become much more accepting of indiscretions over time. Employers just won’t care that ridiculous drunk college pictures pop up about you when they do a HR background search on you.

Anyone who rises quickly in a corporate environment will have people complaining about you all the way up, and it will be easily findable via search. Basically, if someone doesn’t like you, even just for a moment, they’ll have the chance to hit you with an ambiguous but damaging anonymous statement. And it will be vague enough to stop any lawyer dead in her tracks from trying to get it removed, or from even learning the identity of the person who left the comment.

So what will matter? Hard proof of being a bad person. Criminal records. Non-anonymous and clear statements of wrong doing that need to be addressed. Perhaps a picture of you actually committing a violent felony. That kind of thing.

And the kind of accusations that can kill a career today will likely be seen as a badge of honor, and a sign of an ambitious individual who has pissed off a few people along the way.

At least that’s what I hope will happen. Because there are a few pictures of me in high school and college that I’m tired of trying to keep off the Internet. Let’s just get it all out there sooner rather than later, and move on.