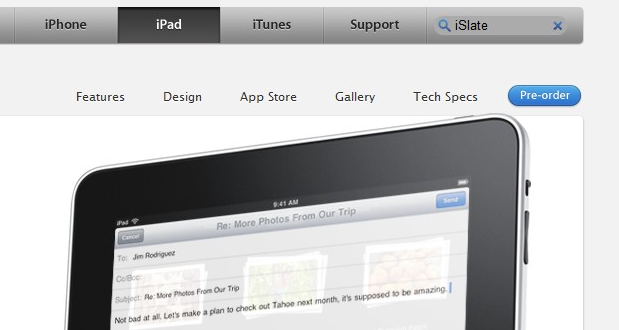 Go to Apple.com. See that search box, top right? Type “iThing” or “iStuff” and you’ll find that there are no shortcuts to product or related pages – evidently because there are no Apple products called iThing or iStuff to find on the website. Now, run a search for the term “iSlate”. Interesting, isn’t it?

At the end of last year, MacRumors discovered that Apple once owned – and likely still owns -the domain name islate.com, after which we ran a search for U.S. and European trademarks related to the term. Applications for the marks existed indeed, only they were filed by a company called Slate Computing, more than likely a shell entity set up by Cupertino in order to hide the associated documents from public sight.

Later, MacRumors found that Slate Computing also applied for a trademark for “Magic Slate”, further fueling rumors that Apple’s tablet device – which was still unannounced, unconfirmed and thus unnamed at that point – would be given the name iSlate. Apple CEO Steve Jobs went on to unveil the device in January 2010, named it iPad, and everyone sort of forgot about those other trademarks. This morning, we took another look at them.

On the 24th of February 2010, Apple’s Senior Trademark Specialist, Regina Porter, signed off on a 6-month extension request for the “iSlate” trademark application. The applicant (Slate Computing) in the extension request says it maintains a “continued bona fide intention to use or use through the applicant’s related company or licensee the mark in commerce” in the United States and highlights ongoing efforts in “product or service research or development”. It was the third time Apple (sorry, Slate Computing) requested this Request for Extension of Time to File a Statement of Use, and it was approved by the USPTO on March 26.

So far, so interesting. But there’s more.

Slate Computing originally filed a trademark application for “Magic Slate” back in June 2009, and apparently amended it to more accurately describe the products and services associated with the name less than two weeks ago (March 15). I’d cut and paste the amended description in full, but it is so broad that it would take a huge amount of space. If you want the full details, go here and click ‘Response to Office Action’.

Again, the applicant contends to have a “bona fide intention to use or use through the applicant’s related company or licensee the mark in commerce” and this time the company also asserts a claim of priority based on the fact that it has successfully registered ‘Magic Slate’ as a trademark in the EU. Sure enough, the European community trademark for ‘Magic Slate’ was approved and published at the beginning of this month (1 March).

In conclusion: Apple is holding on to those iSlate and Magic Slate trademarks real tight, and I think it’s safe to assume we’ll be seeing new products or services by those names at some point.

Could iSlate be the name of that larger Mac OSX powered tablet we’ve been hearing rumors about? Is the Magic Slate the name of a nifty touch-screen peripheral currently in the works?

Update: commenter Ryan Wood suggests that maybe ‘iSlate’ would be an alternative name for Apple to use in case Fujitsu did not hand over its ‘iPad’ trademark (which it actually did about 10 days ago). Definitely a possibility.

Your guess is as a good as mine, but I have a feeling there might be some surprises at the next WWDC (which will likely be held in June/July 2010).