This is the year of Micro Four Thirds. While Nikon and Canon still haven’t dipped their toes in this pool, I think it’s time for the average camera user to look at these things seriously and the power and elegance captured in the E-PL1 – and the affordability captured in its $599 price tag.

Panasonic and Olympus have been riding the M4/3 train for quite a while now and each new device they’ve released has been met with resounding claxons of joy and then disappointment as photobloggers find and focus on the limitations of the format. I’m pleased to report, then, that the E-PL1, is one of the first M4/3 cameras that I could see using as a secondary shooter instead of – or as a back-up to – a DSLR. First, what is M4/3? It is, in short, a lens format based on the four thirds system that does not, in most cases, use the same mirror or prism set-up found in most DSLRs. Think of it as a more powerful point and shoot, like the Canon G11, but with changeable lenses.

I shot with the E-PL1 for a few weeks and I found it to be a great portable camera. The kit lens is great for general shooting and the 17mm is a great for portraits and wider angle shots, depending on how you frame the scene. The real value, however, comes in the Live Guide. The Live Guide is a quick help system that changes your image on the fly by modifying aperture and focus. Using it, you can:

Each of these features acts in real time. Blur Background, for example, gives you a nice bokeh effect in headshots while Express Motion adds motion trails to swiftly moving objects. All of these features change on the screen as you modify them. The sliders allow you to set multiple features and an onscreen guide explains how each function works. Why is this important? Because as point-and-shoot photographers begin to explore new tools, they want to recreate the photos they see in magazines and are frustrated when they shoot with standard cameras (take a look at this Answers thread. Depth of field? Aperture? What is this demonry!) A small, cheap M4/3 can do many of these tricks and using art and scene modes you can add even more to your shots.

The E-PL1 falls somewhere between a Canon EOS Rebel and a G11 or, on the Nikon side, the something like the D5000 and the Coolpix P6000. It is decidedly an odd duck. Interchangeable lenses may put off some purchasers who are unsure if they want to maintain a relationship with Olympus on the long term, but presumably you can swap out lenses as more powerful M4/3 cameras come out. Obviously this lock-in is what Olympus wants but, in a way, I could see this as a second system to use alongside a more formal DSLR set-up. How is shooting with the E-PL1? First, this camera is small and light enough to carry in a bag or purse, which makes it a great solution. The 17mm lens is flat as a pancake and the majority of scenes you’ll encounter on your way can be captured by it or the kit lens with aplomb. Take this shot, for example, taken in full sunlight against a colorful background. There is a bit of a blow-out on the face but it’s a nice enough shot. In direct sunlight you get some nice effects although there is some noise in slightly less well-lit shots, as we see below (taken with the 17mm). Finally, there are wide angle shots taken with the kit lens. Click on the small image to see an example showcasing the haze of New York. I really enjoyed shooting with this camera, even without an optical viewfinder. You can purchase a viewfinder and stereo microphone for the E-PL1 but working directly on the screen was not the exercise in frustration I thought it would be. Folks used to the optical viewfinder will definitely be put off by the E-PL1 at first, but I got over it. I did, however, consistently bring the camera to my face when first started using it.

In short, this camera is perfect for those who don’t want to lug around a heavier DSLR but still want to get some great shots. I worry a bit about durability, especially given the lighter composite materials used for the body, but that’s nothing a good, small camera bag can’t fix. While it won’t replace the shutter bug’s favorite piece of big glass, the E-PL1 is definitely worth some consideration. 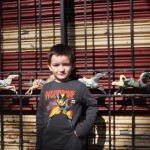