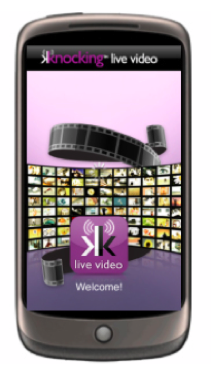 The developer of video streaming phone-to-phone app Knocking Live Video encountered a little controversy during the launch of an iPhone app a few months ago. The app wasn’t approved originally because of the use of a private API, but after the developer appealed to Steve Jobs, Knocking Live Video was ushered into the App Store. Now the developer, Pointy Heads Software, is attempting to bring phone-to-phone streaming between the Android and iPhone, with the launch of a platform redesign and an Android app.

With the new Android app, Knocking Live Video, which enables users to stream live video to each other over 3G and Wi-Fi networks, promises to broadcast live video between Android and iPhone devices. The iPhone app has also been upgraded with the same functionality. Here’s how both of the apps work: Once you download the app and set up an account, you can search to find friends who are on the network and then request to start streaming video. Your friend has to approve your friend request in order to begin streaming live video to each other.

Both of the apps now allows users to create profiles to allow users to connect with each other to share video. You can also share questions, answers and experiences with other users on Knocking Live Video forums. On the backend, Knocking has improved its server capacity to allow for faster load times and peer-to-peer connections. Since the iPhone app’s launch in the App Store last December, it is being downloaded approximately 13,000 times daily.

Pointy Heads Software also has a nifty photo sharing app, called Knocking, which is applies its video functionality to photos. The app allows you to instantaneously share up to 100 photos at once between two iPhones.