This morning, Gmail users are getting one more weapon in the fight against phishers and malware. In a blog post, Google has announced that it is adding a new feature that alerts users when the service detects “suspicious account activity”. Namely, Gmail will now give users a warning if it detects that they’re accessing their accounts from two different geographic regions within a short amount of time (credit cards often do the same thing).

The feature takes advantage of the IP tracking that Google launched back in July 2008, which lets users see the last few IP addresses to access their account. This doesn’t provide amazing accuracy (in the US it only displays what state you’re in), but it should at least help users detect attacks from across the country or abroad.

Of course, there are plenty of reasons why multiple people might be accessing the same Gmail account, so Gmail doesn’t lock you out — it just shows you a warning and prompts you to change your password.  Google’s post also notes that the service will be coming to Google Apps after it gets feedback from its education and business customers.

One other security protection Gmail recently rolled out is default SSL access. 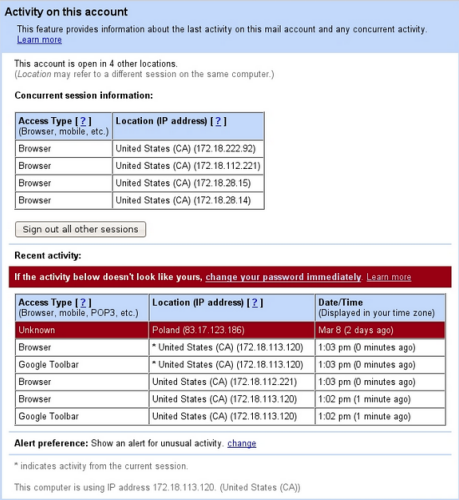