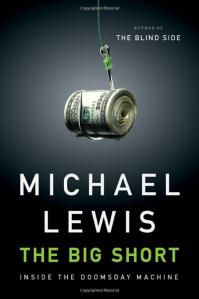 It’s hard to feel sorry for a wildly successful author, but in the case of Michael Lewis I’ll make an exception. Just this once.

Lewis’ latest book – The Big Short: Inside the Doomsday Machine – was published less than a week ago and has already reached the number one sales rank spot on Amazon. It’s an impressive feat, especially for a serious piece of non-fiction writing with nary a wizard, a vampire or an ancient code that’s – holy shit! – hidden in plain sight to boost its sales. But the feat is made all the more impressive by the fact that many of the book’s reviews are, without a word of exaggeration, so negative that they’d made a Nuremberg verdict look upbeat and generous.

At the time of writing there are 64 one star reviews – more than the total number of 2-5 star review combined – sending a clear message to potential purchasers: this book might be popular but it’s also a total sack of crap. Don’t waste your money.

There’s just one problem with that message: less than half of those one star reviews are actually reviewing the book.

Instead, most of the reviewers’ ire relates to the fact that publishers WW Norton have decided not to release a Kindle version of the book at the same time as its hardback release. Writes one (pretty representative) reviewer by the name of Ben Kaplan:

“I’d like to add my name to the list of people who are very disappointed that this book does not have a Kindle edition. No, I haven’t read the book, but I want to — on my Kindle! If all these one star reviews lead to fewer sales, I think that would be a great result and an excellent lesson for the author/publisher.”

I’ve written before about the flawed thinking of publishers who delay Kindle releases to protect hardback sales. It’s an idiotic move but it’s one that many publishers feel forced into due to Amazon’s policy of charging $9.99 for most popular Kindle titles. It’s loss-leader pricing for Amazon and publishers still get their full due, but the low digital price point discourages hardback sales which results – in the short term at least – in a drop in overall revenues.

As someone who has spent hundreds of dollars on a Kindle, I completely understand the frustration of those who are irritated at having to wait until the paperback release of a book before they can get hold of digital copy. But the idea that one star reviews will provide “an excellent lesson for the author” to release their ebooks earlier is bullshit of the lowest order.

I speak from pained experience as an author when I say that we have absolutely no say on when our books are released, in what format and at what price. And yet we’re the ones who have the most to lose from negative Amazon reviews. A book’s overall star rating is one of the most prominent pieces of information on an Amazon page and many readers – quite reasonably – equate a low average rating with a poorly written book. This damages sales of the book and also damages our reputations as writers. Almost nobody – unless they click through and read the full text of the negative reviews – sees a one star rating and assumes its a comment on the decision by the publisher to withhold an electronic edition.

Barry Ritholtz, economics commentator and author of Bailout Nation, has written an excellent blog post on the subject, describing the one-star reviews as “nothing more than collective bullying. ‘Give me your lunch money (kindle version), or I will beat you up during recess (give you one star reviews)” and calling for Amazon to change their review policy.

Ritholz is right – but this it’s a problem that goes far beyond this current Kindle spat. Amazon’s book review policy has long been a bugbear of mine, and most other authors’. Too often, especially with controversial authors, the most negative reviews come from people who haven’t even read the book in question. Their anger, and the resulting one-star review, is simply a statement of general antipathy towards the author and everything they do.

I know of several authors who have had to ask Amazon to take down libelous one-star reviews that focus on their gender, their race, their political views and almost any other aspect of their character. While these might – might – be relevant factors in a general discussion about the author, they certainly have no place in a review of their work. And they certainly shouldn’t contribute to a headline star rating that helps readers decide whether a book is worth their money.

The most frustrating thing is how easy this problem is to fix. Amazon needs to – immediately – change its review policy so that only people who have actually bought a book are allowed to review it. At a stroke, this would get rid of the complaints from people unable to buy a particular title on the Kindle, or unwilling to buy it in hardback – and it would also banish all of the general haters (who would never spend money on a book by the object of their hatred) as well as the kids and trolls who have never bought a book in their life.

It’s hard, in fact, to think of a downside to restricting reviews to actual purchasers of a particular title. Sure it’s a restriction on the right of reviewers to express their opinion on a book or an author without first paying money, but so it should be. Amazon isn’t a general book review site, it’s a store – and as such its reader reviews exist to answer one question alone: is this book – in whatever format it happens to be published – worth my money?

And that’s a question that should only be answered by real shoppers, not crazed Kindle fanboys or assorted haters with an axe to grind.