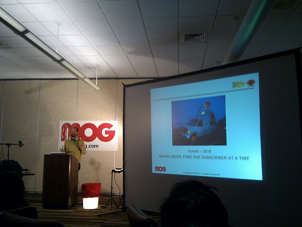 I’m here in Austin, Texas, where MOG CEO David Hyman is introducing the service’s new mobile functionality. This is a major step for MOG, and may be an inflection point in the success of the service. Up until now, users have been restricted to using MOG’s streaming music service on their computers. That’s fine for casual listening at work, but as we’ve seen with the success of the mobile versions of Pandora, users want mobile. And that’s what MOG is unveiling today. Read below for my notes.

Hyman kicked off the talk with some background information. MOG Music Network, the editorial-based site hosted at MOG.com, reaches 16 million unique visitors a month. In December, the company launched Mog All Access, its streaming music service that costs $5/month for all-you-can-eat streaming music. The company is getting 17% conversion from its 3 day free trial (which is high). MOG, Hyman says, is a music service people will actually pay for. But the key will be portability.

MOG’s mobile applications for Android and iPhone will launch in Q2, featuring on-demand streams, downloads, MOG Radio, your library and playlists, High Quality audio, and a $10/month price tag (which includes both mobile and the web version of the service).

First, MOG showcased its Android application. As with the desktop version of MOG, users can stream any song on demand (they can also edit their playlists and upcoming song queue). Along with playlists and individual songs, users can also tap into MOG Radio, which generates a playlist of songs based on one of your favorite artists, albums, or songs (it’s a bit like Pandora, but you can dynamically adjust the content of your station using a slider and can jump to new songs as many times as you’d like). One other very slick feature: on Android, the service will feature voice commands, so you can simply say the name of the artist you’re looking for. 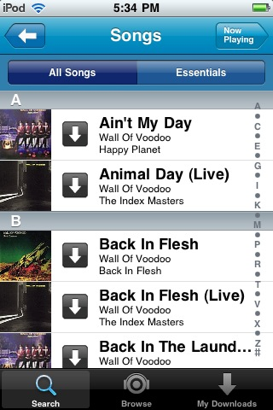 All of MOG’s on-demand streaming functionality looks great, but the killer feature is offline downloading. Using this, users can tap on a song or album they like and choose to download it to their iPhone or Android device, allowing you to seamlessly use the application when your phone doesn’t have connectivity. Hyman says that other offline services that have caching just cache your playlists — MOG lets you select any playlist or album on the site and immediately begin downloading it. Mobile web streaming and downloads will default t0 64kb AAC+ but users have the option to download 320kb/s files (which would obviously take much longer.  Streaming and downloading works over Wi-Fi, 3G, and EDGE.

Regarding whether or not MOG was worried Apple would turn down the application, Hyman said that historically Apple has allowed other subscription-based applications that feature local caching (he alluded to Spotify, which was previously accepted by Apple). But as always, nothing is certain with the App Store.

MOG will be facing off with plenty of competitors. Last fall, Spotify released applications for both iPhone and Android, but the service still isn’t available stateside. Pandora has become very popular on mobile devices, but it doesn’t let you play any song you’d like on demand (it’s free, so plenty of people are willing to overlook that). From a feature perspective, Rhapsody is most similar to MOG (especially once it gets offline playback for its iPhone application, which is coming soon), but it’s $15 a month compared to MOG’s $10.