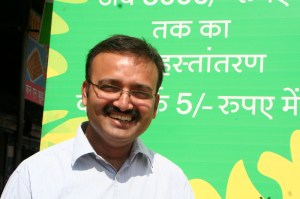 I mentioned in my last post that mobile is bridging the digital—not to mention analog— divide in India, with almost half as many new mobile accounts being opened just last January as there are Internet users in the entire country.  And there are a host of interesting companies seeking to leverage that network as some kind of rudimentary, literally “dial-up,” Internet that extends far beyond the country’s 50 million or so Web users.

One of the most ambitious companies I met with during my last trip to India in November was Eko, a mobile banking company. There are a few SMS-based bank applications in India, but Eko differs because the phone isn’t just another channel for the account—it is the account. You make payments and transfer money simply by dialing numbers. It’s so simple, you don’t even need to understand SMS to use it.

It’s an ingenious offering that doesn’t try to be everything to everyone. It aims squarely at the unbanked—some 60% of India’s huge population. For now, Eko is focusing on the 1,000 kilometer corridor between Delhi and Bihar.

It’s a textbook case of the how hard it is to build something incredibly simple within a sandbox of tight constraints—yet that simplicity is the same thing many would argue caused Twitter’s 140-character missives to become so universal. There are no extra bells and whistles with Eko’s service because there’s no room for them, and at the end of the day, probably little need for them.

The accounts are actually held by the State Bank of India, which insures up to 100,000 rupees per account, but Eko’s customers don’t ever go into banks. The “tellers” are the tiny corner groceries that dot every neighborhood and street corner in India’s crammed urban areas and expansive rural areas. They are the center of commerce for those living on intermittent jobs, tips and handouts. These stores sell medications by the pill, shampoo in tiny sachets, cell phone minutes by the Paisa, and frequently extend credit when needed. Eko just seeks to give this already trusted, daily-visited vendor one more thing to sell.

The interface is simple enough for anyone to use, regardless of language or literacy. Just like filling out a check requires you to enter the payee, 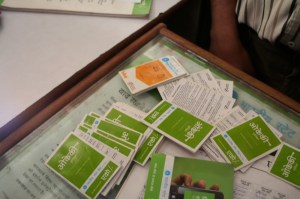 how much you are paying and sign it and Eko transaction has the same three elements. Eko customers type the bank’s short code, then an asterisk, then the mobile number of the person you are paying, then an asterisk, then the amount, then another asterisk. Then comes the signature. That’s the tricky part, but also the most important, because the account is solely on phones, which can be stolen.

Eko’s founder Abhishek Sinha (pictured above amid his signage) wanted to come up with a cost-affective equivalent of an RSA token, so he created a paper version of it. Account holders get little booklets with pages of 11-digit codes. Seven digits of it are random numbers, with four randomly placed black marks, where the person enters his or her PIN. So even if the booklet is stolen, no one knows the PIN number and they still can’t access the account. There’s a VeriSign logo on the back of each booklet. Sinha reached out to VeriSign to see if they could come up with a better solution– instead they endorsed his.

Freedom from always having to carry cash has obvious safety and empowerment implications. But this is a hard company to build out broadly in a country like India. The very strength of the model to truly reach the unbanked—turning those trusted, neighborhood grocers into tellers—inherently makes it costly and time-consuming to build because there are so many of them serving relatively small neighborhoods and villages. Eko has 30,000 account-holders right now. “I thought it’d be a million by now,” Sinha says. “We’ve had a lot of false starts.”

There’s a cost-time trade off. Since the service launched in late 2007, Eko was outsourcing the management of the grocers to a third party who sells multiple things through the channel already. But evangelizing the product takes more hand-holding, so the number of accounts wasn’t growing. Since November, Eko has taken over the management of these grocer accounts assigning employees to each neighborhood and investing in street promotions, blaring its Bollywood-eque jingle extolling the virtues of banking and bedecking stores with in-store signage. Now new accounts are soaring. Eko had just 6,000 accounts before the switch in strategy. It added 10,000 in January and is now adding 10,000 every 15 days.

But costs are going up too. Sinha, who made some money founding a previous company Six DEE Telecom Solutions, has self-funded the venture until now, and in Eko got a $1.78 million grant from the World Bank and The Gates Foundation. But that money will run out this year. He’s working on raising a venture round now—and hoping to get a whopping $10 million. In his previous startup he says he was turned down by literally hundreds of VCs and says that this time it’s going a lot better. Indeed, he jokes, it’d be hard for it to go worse. For one thing, he’s learned a 60 page PowerPoint is overkill.

Like VNL, the solar-powered, mobile equipment company that was 100% bootstrapped by the founder, this is one of those companies that is tricky to build in India. There’s a huge social need and business opportunity if it hits scale, but there’s also a lack of capital to support deals like this. A venture firm is more comfortable in the $3 million-to-$5 million range and a private equity firm would demand a lot more maturity of the business before it would invest. Had Sinha not invested his savings in the project, it likely wouldn’t have gotten this far.

I asked several times if Sinha was worried. What if he couldn’t raise the money? He laughed every time I asked with a look in his eyes of “Do you know how hard it actually is to be an Indian tech entrepreneur?” He says he’s been through enough to know there’s always a way. (Regular readers know there’s a word for that.)