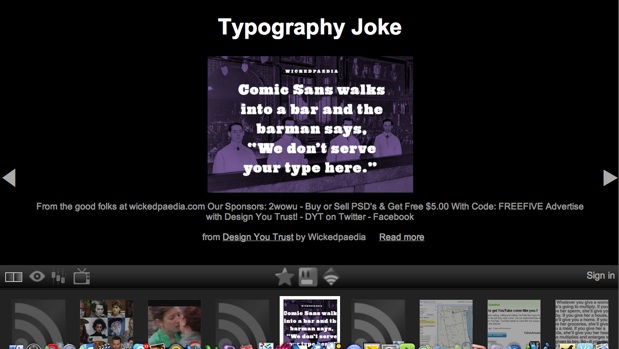 Google launched a new service today in from its Labs called Google Reader Play. It is a more visual way to browse through the most popular items being saved and shared on Google Reader. When you launch it, you are presented with a large photo, video, or text excerpt on the main part of the screen, and can flip through by clicking on arrows or selecting an item from the filmstrip at the bottom of the screen.

Google Reader Play doesn’t require you to sign in, but if you do then you can star, share, and like items, and it starts to recommend things to you based on what your friends share, star, and like in Google Reader. The user interface seems to borrow a lot from StumbleUpon, with its concept of randomly flicking through the best stuff on the Web. In particular, it’s very similar to StumbleVideo, except it includes more than just videos. It is very image-heavy. The user interface reminds me of some elements of enjosythin.gs as well in the way that it presents images and text excerpts in a blown-up manner. The arrows are very Fast Flip, another Labs experiment for the Google News in making magazine and newspaper articles more visually browsable.

Like many of its other recent efforts, especially with Buzz, Google Reader Play is an attempt to encourage more direct sharing and to capture that sharing data. More and more Website referral traffic is coming from sharing service such as Twitter and Facebook. Google wants to be in the sharing game as well.