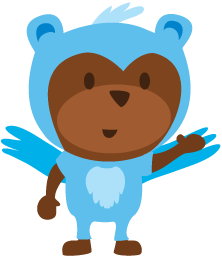 Since it launched last July at our Realtime Stream CrunchUp, Brizzly has been one of the best web-based Twitter apps. It offers support for viewing pictures inline, shortened link expansion, multiple Twitter accounts, and even some Facebook support. But they’ve been quiet in recent months. Now we know why.

The Brizzly team went into hibernation because they made a couple of acquisitions, and have been working on a new feature. First, they bought one of my favorite Twitter iPhone apps, Birdfeed. One of the earliest apps to gain Twitter geolocation support, I had been worrying that Birdfeed would go extinct because developer Buzz Andersen recently joined Jack Dorsey’s mobile payment startup, Square. But since the acquisition (which actually occurred in the November/December timeframe), Andersen has been working closely with the Brizzly team to wrap the app in its new skin.

And it’s more than just a new skin, as Brizzly for the iPhone, the app gained support for posting pictures to the service (or using Flickr), Twitter Lists, and tab editing to better customize the app. Also, if you are on a tweet page that has a photo link attached, you’ll be able to see a preview of that photo. It’s a robust client that stands among the best for the iPhone. And it has a bonus feature: News.

The News tab on the iPhone app actually ties in to the big new feature for Brizzly itself: Brizzly Guide. Previously, Brizzly’s website had an area on the side where users could explain the current trending topics on Twitter. Now, that area is a larger site, Brizzly Guide, which gives you more detail about the trending topics. This is actually quite useful as a source of news information because it can tell you both quickly and rather throughly why something is trending. For example, this page for Chuck Norris shows his name is trending because today is his 70th birthday. The page includes images (in this case, of Norris), and links to other relevant information about him. It also has an except from Wikipedia to tell you more.

These Brizzly Guides are all community-built, like Wikipedia. Anyone (with a Brizzly account) can edit them at anytime. Top contributors are displayed at the bottom of the Guide site, as are top trends this week. You can also search these guides, to look up previously hot topics. 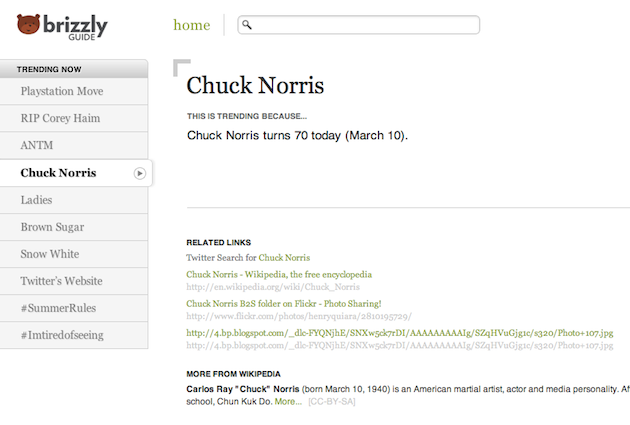 The other acquisition Brizzly made could potentially be very interesting in the long run: Wikirank. Though the service was shut down a little while ago so that the team behind Small Batch Inc. (its parent) could focus on their new project, Typekit (which aims to better fonts to the web), it remained an interesting one. As a visualization and analytics tool for Wikipedia, Wikirank showed data in interesting ways that offered insight not seen on the face of Wikipedia itself. Though Brizzly co-founder Jason Shellen isn’t yet sure what they’re going to do with Wikirank, the idea will probably be along the lines of visualization and analytics of this Brizzly Guide information.

Shellen also notes that Brizzly signed an enterprise agreement for Typekit so that they can use it on Brizzly Guide.

Something else Brizzly has been working on: a new idea called “Picnics” (here’s an example). Basically, this allows someone to pick out tweets from the public Twitter stream and respond to them in a different, but still public, environment. Brizzly tested out the idea the other night during the hit Fox show House (frequent House director Greg Yaitanes is an investor in Brizzly parent Thing Labs), and Fox even promoted it. Actor Jesse Spencer (who plays Dr. Robert Chase on the show) responded to tweets directed at him as they came in.

While Picnic isn’t ready for a full-scale roll-out just yet, Shellen notes that it “should prove to really transformative for us in the near future – expect to see more picnics in the future.”

And if all that wasn’t enough, something else Brizzly has been working on recently: a new round of funding. Stay tuned.