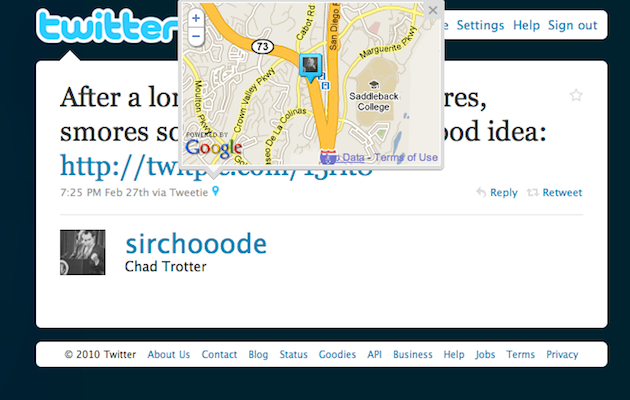 While Twitter’s geolocation feature has been live through its API since last November, there was no sign of integration into the main twitter.com site until now. As you can see in the screenshot above, for tweets tagged with location, right next to the source of the tweet there is a location placemarker. When you hover over it, it turns blue, and clicking on it brings up a little Google map showing the location that tweet was sent from.

You can see these maps as overlays both on individual tweet pages, and on tweets in your main stream. In some cases, depending on how Twitter geolocation API is being used, it looks like place names are even passed through to Twitter. For example, here’s a tweet sent from Foursquare that also says where the tweet is being sent from.

The timing of this move by Twitter is significant. Earlier today, the New York Times reported that Facebook would unveil its answer to location next month at its f8 conference. Twitter’s first-ever Chirp conference takes place just one week before f8. Google, meanwhile, is in the game with Latitude and to some extent Buzz (but could have been in it a lot more). And of course, every app and their mother appears to be launching with some sort of location functionality at the SXSW in Austin, Texas, which begins on Friday. Many of those apps use Twitter’s geolocation API to pass the data back to Twitter, so it makes sense that this would be a good time to turn the functionality on for the website.

Update: It looks like Twitter has just turned off the location functionality after having it on for a bit. Look for it to come back shortly — certainly some time before SXSW. 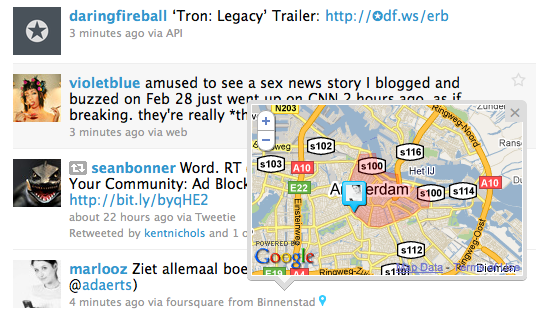