I’m from a relatively small city in Ohio called Pepper Pike. If I want to find out news about it, the easiest thing for me to do is Google “Pepper Pike News.” The number one result is quite useful: Topix.

In fact, Topix is the number one result for a ton of small towns across the country. That’s what happens when you’ve been aggregating local news for six years. But the site has never garnered much attention in the startup scene because back in 2005 (before TechCrunch even existed — our initial coverage was in 2007), it took a majority equity investment from three of the largest media firms in the U.S., Knight Ridder, Tribune and Gannett. Since then, the focus has been all about getting the business to work.

And while Topix has been through some permutations throughout the years, the focus has always been on local and yes, topics. Aggregation was the key to all of this for a while, but in recent years, the community that uses the site has been largely responsible for a lot of the content. And that’s more clear than ever as the site is about to cross 100 million posts (comments).

The milestone should be hit at some point today, as the site is getting about 125,000 comments a day now. That’s on top of 120 million average monthly pageviews from 8.8 million unique visitors. All huge numbers for a site that hardly anyone talks about.

But that’s the thing, people are talking about it, you just may not realize it unless you’re in one of these smaller towns. For these people, Topix is a gathering spot to discuss the local news. Many of these cities (like Pepper Pike) may not have a daily local newspaper or website that makes it easy to discuss issues. That’s exactly what Topix does. And perhaps even a little too easy as the site has to remove some 45,000 comments a month due to things like hate speech, CEO and co-founder Chris Tolles tells us.

Not just that, Topix gets about 10 subpoenas a week due to comments, Tolles says. That’s a pain, but it’s the price you pay for having such an active community.

Why not ban anonymous commenting? Tolles has thought about this a lot, and done internal studies. But all conclude that it wouldn’t be good for the site. For example, while you’re 50% more likely to get a crappy comment from anonymous commenter, you’re also going to get five times the number of comments when you allow for anonymous ones. And if there’s a situation where a person feels the need to call out a local official, doing so anonymously allows them to feel protected, Tolles says.

So, Topix has all these comments, and all this content — but the challenge has been how to monetize it. While Topix has deals with seveal big players, including CNN, the real money remains in advertising. So Tolles has spent much of the past year building up an ad sales team. And following the ad collapse last year, it’s finally starting to pay off. Topix is seeing $4 eCPMs, Tolles says. If that keeps up, he thinks the site can turn a profit relatively soon.

Something else interesting about Topix: mobile usage is huge. While the service has had (what Tolles considers to be currently a sub-par) iPhone app for a while, it’s the mobile web that people seem to be taking to to use the site. And something like 75% of the people who are actively commenting on a mobile device are visiting from an iPhone. That may seem somewhat surprising given Topix’s focus on small towns and communities, but it seems to speak to the iPhone’s appeal to the masses. The big time commenting numbers also apparently speak to Topix’s appeal to the masses. 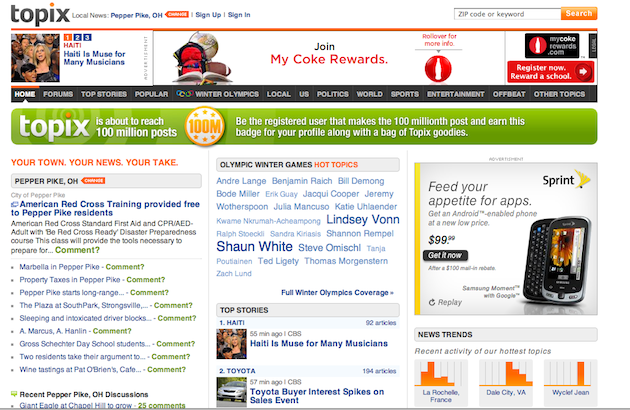