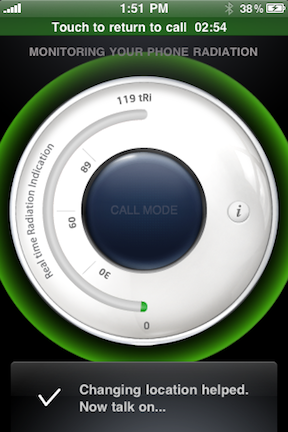 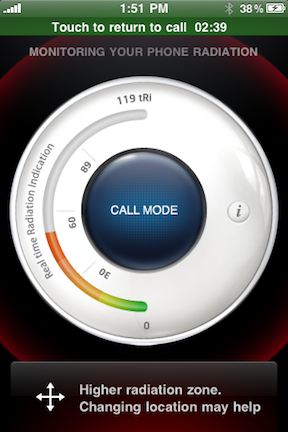 Here we go again . . . Apple App Store Fail No. 5102928. A few weeks ago stealth Israeli startup Tawkon gave me a sneak-peak developer build of what I believe is the most important app on my iPhone. What does it do? It analyzes the cellular radiation your iPhone emits at any given moment, at any given location, whether in standby mode, or within a call.

Sounds like science fiction, right? Well, that’s where Israeli hardware and software engineering prowess come into play (more on that in a second). Sadly, Israeli military training may have met its match . . .  the infamous iPhone App Store approval process.

The purpose of Tawkon’s app is to provide the user with an indication—or “prediction” as they call it—of the radiation level being emitted by the iPhone. This level changes based on environmental conditions, distance from cell towers, and even the manner in which the device is held. To illustrate: the iPhone’s antenna is located at the bottom of the device. If the user cradles the phone too tightly in the palm, the antenna has to work harder, thereby increasing radiation. The 3GS models have improved chipsets, so radiation would be lower on them compared to previous versions, and Tawkon takes this into considering when calculating its prediction.

When launched, the app instantly provides users with an indication of the radiation level in the iPhone’s stand-by mode. A green/orange/red pulse makes this dummy-proof. For example, radiation levels in my office are minimal, but are much higher in the men’s room which is deeper in the building, where more concrete forces the iPhone to work harder to hold a connection to the nearest cellular base station. 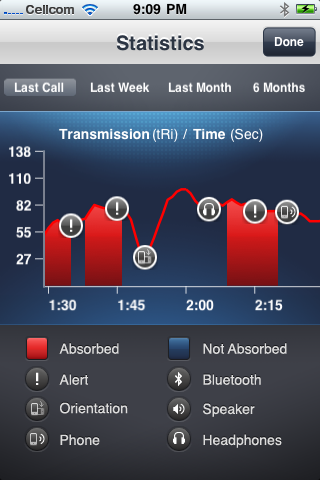 To find out what the radiation levels are during a call, the app lets users launch a call through the iPhone’s address book. It then monitors the radiation levels in real time and sends prompts via vibration and a tone should they reach the high-end of its threshold. The app also employs the iPhone’s proximity sensor and provides suggestions such as moving location, using a headset and even changing the iPhone’s orientation to your face.

So how does Tawkon do it? Algorithmic magic analyzes your phone’s dynamic SAR (Specific Absorption Rate) levels, location, environmental factors, as well as unique smart-phone capabilities such as bluetooth, accelerometer, proximity sensors, GPS and compass. The level of radiation a person is exposed to during calls is determined by analyzing several dynamic parameters, including the impact of environmental factors such as distance from cellular towers, network and weather condition, terrain, antenna’s proximity from the body, antenna orientation (if the user is holding the phone vertically or horizontally) and travel speed.

It’s perfectly natural to be skeptical about Tawkon’s app, so let me lay out a couple of things to set the record straight: first, Tawkon is not looking for controversy. They contacted me weeks before they submitted the app to the App Store with the sincere hope of not being stonewalled. Ironically, were this a gag app, not only would there have been no controversy, the app’s revenue potential may actually be higher. Second, I have no way of testing whether the app’s output is actually correct. However, I took the time to meet the three founders and feel comfortable stating that they struck me as serious, highly capable hardware and software engineers who’ve spent 18 months developing a technology they believe holds real compelling value for users. They claim the app has gone through lab testing to ensure its output is correct. For what it’s worth, I take their word for it.

Tawkon’s app has been in the approval process for a couple of weeks with the App Store denying approval on the grounds that a diagnostic tool of this nature would create confusion with iPhone owners from a usability perspective. This reasoning was communicated by an App Store representative on a phone call with the Tawkon team. I find this claim questionable as I’ve been using the app and there’s nothing problematic about it in this respect.

Tawkon is keeping optimistic, holding hope that Apple will approve the app which they intend to sell for between $5-$10. In the mean time, it’s plugging ahead in its development of Blackberry and Android versions.