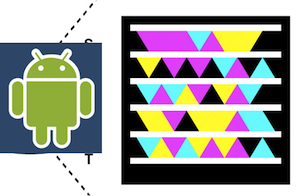 In December 2008, Microsoft surprised a lot of people by releasing an iPhone app — Seadragon Mobile. A month later, they ensured the move wasn’t taken as a joke or gimmick by launching another app, Tag, into Apple’s App Store. Now, they have a few, including an app for Bing. And starting today, they’re doing the same for Android.

Tag for Android is the first Microsoft-made app launched on the mobile platform. This is notable, of course, because Android is the mobile platform by Microsoft’s chief rival: Google. Still, as we saw with the iPhone, Microsoft has no problems getting its technology out there, even if it means using rival platforms. Aside from Android and iPhone, Tag also currently works on Windows Mobile, J2ME, Blackberry and Symbian S60 phones.

Microsoft’s Tag technology allows you to use your phone as a mobile barcode reader. You simply point your phone’s camera at a tag (think: a smaller QRCode), snap a picture, and the Tag program will interpret it. This can be used to place things like coupons in physical locations, for example. Other companies, including Google, are working on these mobile barcodes as well. In fact, just prior to the Nexus One unveiling, all Google employees were given the device with a special barcode on the back that other Android devices could scan to get that person’s information.

Despite the high level on animosity between Microsoft and Google, it’s great to see that Microsoft isn’t above creating apps for the increasingly popular Android platform. Microsoft made its own big mobile headlines last month with the unveiling of Windows Phone Series 7, a complete reboot of its mobile strategy, due to launch later this year. That move should help Microsoft better compete with the current hot mobile platforms, Android and the iPhone.

The Tag application is available today in the Android Market; it’s a free app.