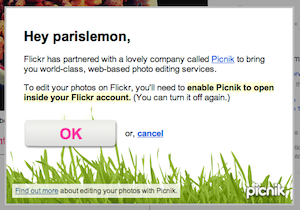 Earlier today, in writing about Google buying the photo-editing service Picnik, we noted that the most interesting thing about the buy may be that Picnik is currently Flickr’s default photo editor. Upon hearing the news, we reached out to both Google and Yahoo (which owns Flickr) to see what it means for the future of the partnership. The responses were interesting.

Google, for its part, says that it will allow third-party sites (including Flickr) to continue to integrate with it. Here’s the statement they sent us:

We believe that openness is always the best approach and will allow third-party sites to continue to integrate with Picnik.  People should be able to pull photos from other photo sharing sites, make edits with Picnik and save to whatever site they choose.

That sounds good, right? Well, it doesn’t sound like anyone bothered to tell Yahoo. Here’s their statement (from OutCast Communications, which does Yahoo’s PR):

Thanks for getting in touch. At this point we don’t have a comment on the acquisition, but will let you know when and if we have information to share.

If Yahoo was going to continue the Picnik relationship, don’t you think they’d come out and say so. Or at least say something like, “at this time, we see the relationship continuing.” Instead, it looks like they may be weighing their options. Or maybe they just don’t really know how the acquisition will affect things yet.

The problem is that Picnik is currently the only way to do that majority of edits on Flickr. Without it, the product as a whole becomes less valuable. So will Yahoo have to build its own photo-editor (which they obviously were against before, or they would have done it rather than partner with Picnik)? Or will they partner with someone else — maybe Aviary?

Regardless, Google has a history of acquiring companies and then letting their products wither (Dodgeball, Jaiku, etc). Let’s hope that’s not the case here, and that Picnik is at the very least integrated into Picasa (Google’s online photo service), because it’s a solid service.