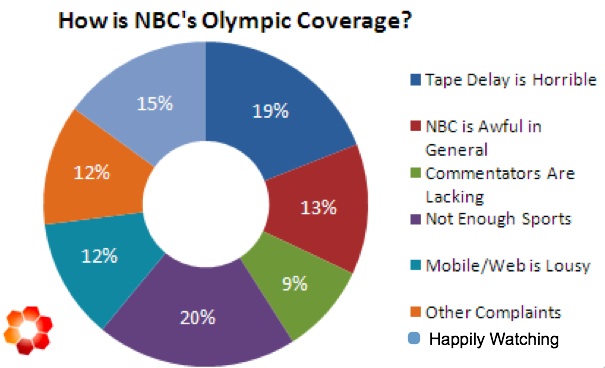 The coverage of the Winter Olympics on NBC has been painful to watch. In addition to the tape delays which ruined the outcomes for anyone paying attention to any other news, sports or social media outlet other than NBC, there are a lot of other complaints. In between the hard-hitting reports of polar bears in the Canadian North and life among the lumberjacks, NBC did manage to squeeze in some actual Winter games, which were matched in quantity by the constant loop of the same handful of commercials on heavy rotation for McDonald’s, Visa, AT&T, Diet Coke, and NBC’s upcoming shows Parenthood and the Marriage Ref. (Thank goodness for DVRs). 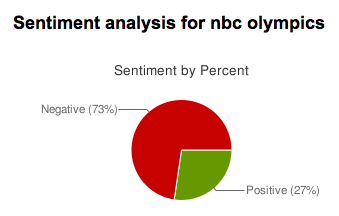 We already know that NBC’s handling of its Olympics coverage sucks, if only because everyone on Twitter says so. Right now, Twitter Sentiment shows that 73 percent of Tweets about “NBC Olympics” are negative. But what are they complaining about exactly, and is it just Twitter? Some new data from Crimson Hexagon, another sentiment analysis service for brands, shows the breakdown of hate:

These numbers come from an analysis of nearly 20,000 Tweets and 5,700 blog posts and forum comments. On Twitter alone, the biggest complaint by far (25 percent) is the tape delay. But that’s what you’d expect from a bunch of realtime addicts. Overall when you count blogs and forums that complaint ranked second, barely nudged out by the lack of enough actual sports coverage. Notably, only 15 of people on the Web were happy with NBC’s coverage.

Perhaps people just go to the Web to complain, and happy viewers had no reason to log on because they were enthralled by those polar bears. But something tells me the Web’s view reflects the general one. How do you rate NBC’s coverage?