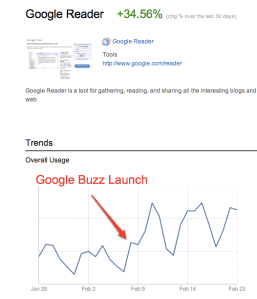 Social sharing is becoming a big contributor to traffic for many sites. While Facebook and Twitter drive more sharing than any other services, Google is trying to compete with Buzz, which is now part of Gmail but shares links to article and blog posts through Google Reader. Over the past month, according to AddThis, sharing through Google Reader is up 35 percent, with a big jump on February 9, the day Buzz launched.  This number only measures sharing through the AddThis button, which is on more than 600,000 Websites and gives you the option to share content through more than 200 services. So it is only a proxy for total sharing on Google Reader, but a decent one.

Google Reader still barely registers when compared to Twitter and Facebook, which account for 31 percent and 8 percent of all sharing via AddThis, respectively.  But Buzz is definitely giving it a boost.

You can now chart how different services do against each other on the sharing front via a new services directory on AddThis. For instance, Google Bookmarks does much better than Google Reader, with 5 percent of all AddThis activity.  It even beats Digg (which has 3 percent).  Google Bookmarks is probably used more for personal bookmarking than for social consumption, but it is smack in the middle of Twitter and Digg when it comes to activity via AddThis.

Another comparison is Tumblr versus Posterous, which suggests that Tumblr  is much more popular as a reposting tool, and is about neck-and-neck with WordPress. 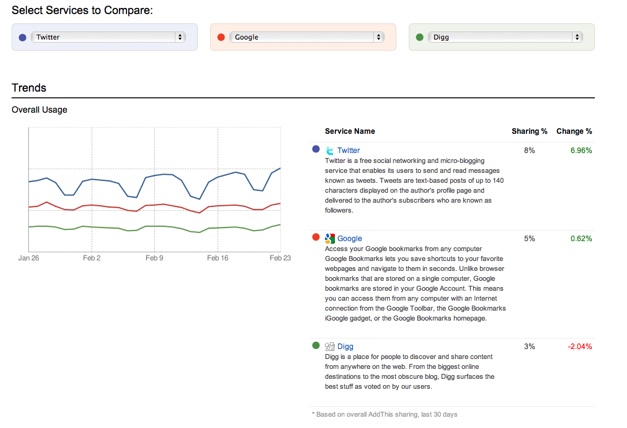