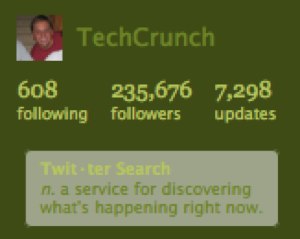 Twitter is getting closer to launching its own advertising on the micro-messaging service. Speaking on an advertising industry panel yesterday, the company’s head of monetization, Anamitra Banerji, confirmed that Twitter would launch its own advertising platform within a month or so, at least in a beta test. Twitter has been planning to launch an advertising product for a long time. Last November, COO Dick Costolo told us at our Realtime Crunchup that ads were coming. He promised the new ads “will be fascinating. Non-traditional. And people will love it.” And a year ago, Twitter execs discussed different advertising revenue models in a strategy meeting, including realtime search ads, sponsored Tweets, and AdSense-like widgets that could appear on other sites.

Of course, other startups are already experimenting with their own Twitter ads ranging from in-stream sponsored Tweets (Ad.ly) to placing retweet buttons on display ads themselves (Tweetmeme). But what will an official Twitter ad look like? And will people really love it?

There are lots of options for different ad units on Twitter.  Seth Goldstein, the CEO of SocialMedia, was on the same panel and is the one who grilled Banerji about Twitter’s ad plans.  He presented the slide above, which gives some flavor the types of ads which could appear in a social stream like Twitter.  Ads could range from straight endorsements (“This is my favorite salsa”, “My favorite car is a Jetta”) to more subtle local business ads (“I am at Starbucks,” “I am the Mayor of Superdive”).

Other people think the Tweets themselves should be sacrosanct.  Robert Scoble, for instance, suggests the idea of a SuperTweet with all sorts of metadata that pops up when part of the message is rolled over with your mouse.  This data could include things such as the location of the Tweet and how many times it’s been retweeted, but it could also trigger a contextual ad triggered by certain keywords.

Most likely, the ads will start out simple.  If they are in-stream ads, they will be clearly labeled as such, perhaps by highlighting the Tweet with a different background color or otherwise clearly marking it as “Sponsored.” Right now, the only way you know something is a sponsored Tweet is if it is disclosed in the text of the Tweet itself, like in this Ad.ly example: 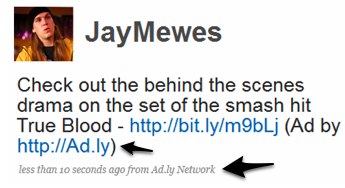 Twitter could make them stand out more and really distinguish them as ads.  But that in itself would find little love from most Twitter users.  For ads to work on Twitter, or anywhere else on the Web for that matter, they need to be authentic and useful. Contextual ads related to keywords in specific Tweets or shown only to people who are known to be interested in related topics is a better approach.  It is fairly simple to analyze people’s Tweet streams and cull the main topics they either talk about or the topics of the Tweets the people they follow talk about.  Semantically targeted ads should perform better than random ones.  But it’s still not clear what there would be to love there.

It also is not clear what the rules will be for Twitter ads. Will they just start appearing in everyone’s stream, or do you have to allow ads into your stream?  And if you allow the ads, do you get a cut of the ad revenues since they are being shown to your followers?  I’d be very surprised if there is a user opt-out for ads, and even if Twitter starts the ads on its own site it would make sense if it could syndicate them out to third-party Twitter clients.  Eventually, if a Twitter client takes the stream, it will have to take the ads as well.  Presumably, Twitter would offer them a cut of any ad revenues much like Google does with AdSense.

Finally, there is the question of how the ads will be paid for. It makes little sense to charge on a per follower or per impression basis because people tend to read their Twitter streams sporadically.  A cost-per-click model would work much better. Twitter could create a keyword auction to trigger the insertion of the ads and advertisers would only pay for actual clicks like they do with search ads.  That way the entire message of the ad would not have to be contained in the Tweet itself.

With 1.5 billion Tweets a month and growing, advertisers will certainly love any opportunity to insert themselves into the conversations occurring on Twitter. But users generally don’t love ads, they hate them. And it is hard to believe that Twitter is somehow going to magically change that basic fact of life. You tell me: What would Twitter have to do to make you love its ads?