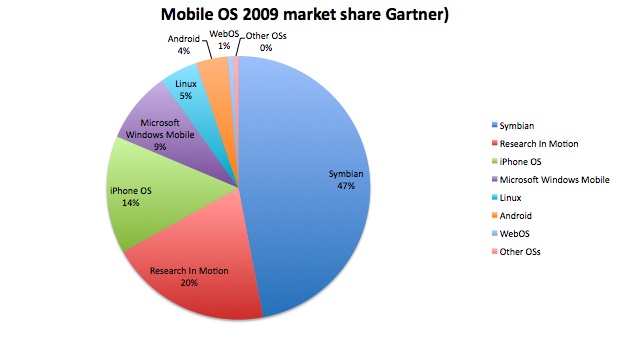 Last year, Apple’s iPhone nearly doubled its worldwide market share of smartphone sales to 14.4 percent, up 6.2 points from the year before, according to the latest market share figures put out by Gartner.  The iPhone still trails behind Nokia’s Symbian-powered smartphones (No. 1), which saw their share decline 5.5 points to 46.9 percent, and RIM Blackberries (No. 2), which gained 3.3 points to end the year with a 19.9 percent share.

Remember, these are worldwide estimates.  In the U.S., both Blackberry and Apple are much larger than Symbian.  And when it comes to mobile Web traffic, Apple and Android dominate with 81 percent share.  According to Gartner, Android phone sales jumped 3.4 points (to 3.9 percent), but Android is still smaller than WIndows Mobile or Linux.  Those mobile OSes, however, saw their market share drop  3.1 and 2.9 percent, respectively.  Palm’s WebOS barely made a mark with 0.7 percent share.

So when you tally everything up, Symbian lost the most share (5.5 percent), followed by Windows Mobile and Linux.  The iPhone saw the biggest gain (6.2 percent), compared to smaller but roughly equal jumps by Blackberry and Android (up 3.3 and 3.4 percent, respectively).

All together, Gartner estimates 172 million smartphones were sold last year, up 24 percent.  In contrast, total mobile phone sales were flat at 1.2 billion.  Smartphones represented 14 percent of total mobile handset sales last year, up from 11 percent in 2008.  The iPhone, for all of its growth, made up only 2 percent of all mobile phone sales last year. Below are the market share tables from Gartner: