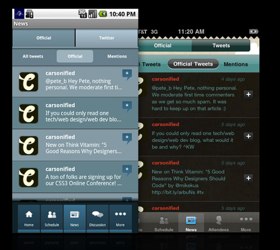 We’re big fans of Mobile Roadie, a startup that helps develop iPhone apps. But the one gripe we had was that Mobile Roadie was limited to the iPhone platform. Today, our wish came true as Mobile Roadie is launching functionality for Android phones.

The beauty of Mobile Roadie’s platform is that it offers a dead simple mostly-automated system to build apps and have them posted to Apple’s App Store in as little as a week. Launched earlier this year, the startup develops mobile apps for other conferences, events, and venues, as well as musicians, athletes, politicians, and other celebrities. The apps can provide users with access to news, music, live and recorded video, photos, event listings, and more. The apps also feature integration with YouTube, Brightcove, Flickr, Twitpic, Ustream, Topspin, Google News, RSS, Twitter, and Facebook.

Another bonus of Mobile Roadie’s platform is that its CMS allows users to simultaneously make updates to both their iPhone and Android Apps. And using push notifications, customers can send alerts that appear on users’ screens, geo targeting messages down to a one-mile radius. With the launch of Google Android support, Mobile Roadie will be powering both iPhone and Android apps for Ashton Kutcher, Dolly Parton, and Madonna. We hear Taylor Swift will be launching apps soon as well.

There’s no doubt that Mobile Roadie’s functionality for Android platforms will make its platform more attractive to users. And the ability to simultaneously manage your iPhone and Android apps through one interface is a compelling feature. With Mobile Roadie’s track record of success over the past year, we’ll continue to expect more innovations to be produced from the bootstrapped startup in the near future.