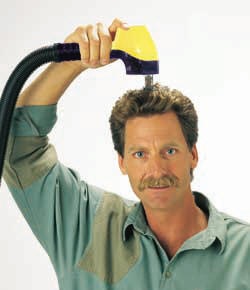 In August 2009, home haircutting system maker Flowbee filed suit against Google in federal district court in Corpus Christi, Texas. The company was the umpteenth to take the Mountain View company to court for selling sponsored search ads to competitors under its trademarked keyword, which it alleged ‘confused’ customers.

On the 18th of February 2010, Google filed its answer to the complaints and simultaneously moved to file a counterclaim against the haircutting system vendor (documents here).

In the most recent filing for the case, Google denies most of the allegations Flowbee had brought forward, including that it has made any unlawful use of Flowbee’s alleged trademarks and similar marks.

At the same time, the company admits that it allows third parties to bid on keywords that may trigger display of their advertisements as Sponsored Links.

Google also filed a counterclaim against Flowbee for breach of contract. The search giant says that by filing the instant action in Texas, Flowbee breached the mandatory venue selection provision (federal or state courts of Santa Clara County, California) of the AdWords contract it had entered with Google. The Mountain View company is seeking damages for the money and resources that were spent trying to transfer the action to the ‘proper’ venue.

And then there are a couple of nuggets in the whole thing that are quite amusing (if you’re anything like me, that is).

For example: Flowbee in its suit filing documents attempts to define “The Internet and the World Wide Web” and mentions that people can visit Web pages using browser programs like Macintosh Safari or Microsoft Internet Explorer. In its answer, Google subtly points out that while it does not dispute the description of the Internet is essentially accurate, it denies knowledge of a “Macintosh Safari” browser program (it’s simply called Safari).

Also funny: Eric Goldman, Associate Professor of Law at Santa Clara University School of Law and well-known blogger, at the time Flowbee filed suit noted that a lot of the language in the documents was seemingly lifted from another lawsuit that was filed earlier by American Airlines against Yahoo and Google, covering similar grounds.

But reading Google’s answer, I stumbled on the company name ‘Rosetta Stone’ a number of times, and I wondered if Google’s attorneys had also copied most of the language from another suit and forgot to replace the company name Flowbee by Rosetta Stone here and there. Sure enough, the language education software maker sued Google a month before Flowbee did, equally claiming that the AdWords program infringes its trademark.

And you thought sifting through court documents is always a boring way to spend a slow Saturday afternoon!