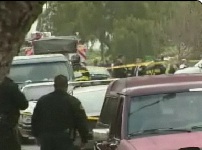 A small Cessna twin-engine plane crashed in East Palo Alto today, killing three Tesla Motors employees and taking out power in parts of the city. The plane took off from Palo Alto airport and reportedly hit some electrical lines. The names of those who were on board have not been released. The plane was registered to Doug Bourn, a senior engineer at Tesla. It is not clear if he was the “high ranking official at Tesla” piloting the plane or if he was even on it.

Nobody on the ground was injured, but two homes caught on fire, including one used as a day care center. Fortunately, the day care center was empty at the time of the crash.

Eric Savitz at Barron’s has been blogging updates about the accident all day. It appears to be responsible for a widespread power outage in Palo Alto, which affected Facebook’s offices and many startups. For example, power is still out at TechCrunch HQ in Palo Alto (although our site is still up because our servers are not there).

The plane was headed to Los Angeles and was an older Cessna 310 manufactured in 1976.

Update: Tesla sent us the following statement from CEO Elon Musk: “Three Tesla employees were on board a plane that crashed in East Palo Alto early this morning. We are withholding their identities as we work with the relevant authorities to notify the families. Our thoughts and prayers are with them. Tesla is a small, tightly-knit company, and this is a tragic day for us.”