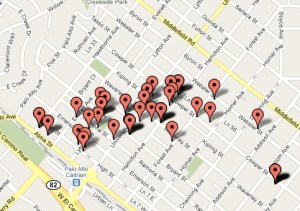 The tragic plane crash which killed three Tesla employees flying out of the Palo Alto airport at approximately 8 AM this morning also took out the city’s power.  The accident has left over 28,000 Palo Alto residents and businesses without power in the heart of Silicon Valley.

According to the data in CrunchBase, up to 240 of these 28,000 customers are local startups, VC firms and other companies which include the likes of Facebook, Socialtext, Tapulous, and VMWare.  (The TechCrunch office is also out of power).

The interactive map below will give you an idea of who else is affected by the outage. We arrived at this estimate by looking at companies who are within a 1.5 mile radius of the middle of Palo Alto; thus encompassing most of the city. Although this is not a perfect number (some companies shown might have power, while omitted companies may not), it is a rough estimate of which startups might be without power.  There is no current estimate for when power will be restored, but the last estimate, as of 930 AM PST, was 5:30 PM PST.

Startups have reacted differently to the outage. While many have moved to nearby coffee shops, such as Starbucks, in order to have access to Wi-Fi, some are simply working from home (assuming they live outside of Palo Alto). A few outliers are taking the day off and enjoying the warm California sun.

If you were affected by the power outage, let us know how you’re dealing with the situation in the comments section below.