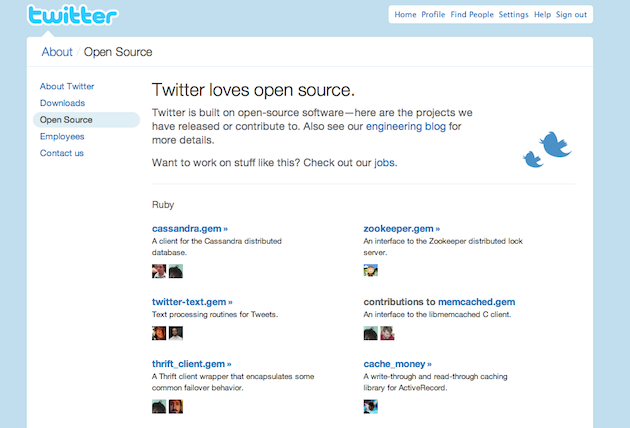 In recent months, there seems to be a mad rush of companies trying to one-up each other with how open-source they are. Twitter is the latest, as they have launched a directory of all the open source projects they’re currently working on and/or contributing to.

The list is fairly impressive. It includes open source projects in Ruby, Scala, Java, C/C++, and other various tools. Some of them you may have heard of, such as Cassandra, the P2P structured storage network Facebook began in 2008. While some of them you may have not, such as Murder, the code deployment project that uses Bittorrent. Underneath the short description of each project, you’ll see the icon for the Twitter employee that is working on it.

Just in case it wasn’t clear how Twitter feels about open source — from the page: “Twitter loves open source. Twitter is built on open-source software—here are the projects we have released or contribute to.” They then go on to note that if you want to work on stuff like this (programmers love this stuff), you should check out their jobs page. Apparently, it’s working. Today, another former Googler joined up.