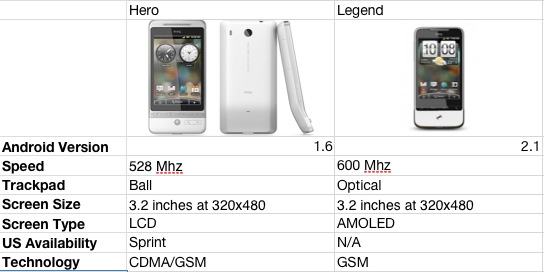 The HTC Hero, available in the US from Sprint, is less than a year old but that doesn’t mean HTC can’t up the ante. The Legend, a 3G GSM phone not currently available, has a slightly faster processor and a few interesting – and telling – details that are worth a second look.

First, the processor has jumped from 528 MHz to 600, a bump that puts it on par with the Palm Pre in terms of speed. The screen is AMOLED, a brighter, more vibrant display technology and the Legend has an optical trackpad rather than a small ball.

The Legend is a strong upgrade to HTC’s Sense UI series of phones and presumably all of the social media functions, including Facebook and Twitter contact integration, will be present here. If history is any guide, expect this phone to reach us later this year, probably mid-summer, if it visits us at all.