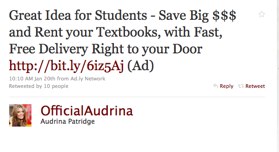 The idea of ad-sponsored Tweets has been the subject of some controversy. Some say advertisements within a Twitter user’s stream could distort the user’s authority. The idea that a Twitter users (and advertisers) would be monetizing their followers is questionable and has raised some interesting discussions. Ad.ly, which launched last year, aims to link up advertisers with Twitter users and then distribute links to marketing campaigns through the user’s tweet streams with full disclosure. Today, the advertising platform is officially launching its self-service platform for advertisers and revealing a few interesting stats about the ad service.

Ad.ly’s platform is designed to be self-service for both Twitter users and the advertisers. So for example, an advertiser for Dell could choose which Twitter power-user to pitch their ad too and then submit a bid to a particular user. The publisher then approves or denies the request. Once the publisher approves the Tweet, the message is sent out via their account by Ad.ly. You can find examples of Ad.ly Tweets here, here and here. Each campaign requires the publisher to send out four Tweets over the course of a week and each Tweet identifies Ad.ly and links to an ad campaign for a brand. Of course, publishers are paid and advertisers get their reach. Until now, however, the platform has not been fully open for all advertisers.

The self serve platform allows publishers to, create Tweet campaigns, access the system to pick publishers, see metrics to track the success of campaign. Advertisers can see click through rates of ads and conversion rates all through a realtime interface. Sean Rad, founder of Ad.ly, says the self service platform is designed to recruit small businesses who may have have smaller advertising budgets to participate in Twitter advertising. The platform also includes a pricing algorithm that will total how much the advertiser should pay the publisher per tweet based on performance of the publisher, clickthough rates, number of followers and other metrics.

Ad.ly also offers analytics that provides valuable data to advertisers including user engagement, male and female segmentation, location, and sentiment analysis. Ad.ly recently partnered with PeopleBrowsr, a startup that data mines Twitter, to provide the data to users. Ad.ly will profile each publisher with user data, and will allow advertisers to target their campaigns according to this data.

Currently the Ad.ly network has 26,000 publishers (Twitterers), 21 of which have more than a million followers. Publishers range from celebrities like Kim Kardashian, Bethenny Frankel, and Soulja Boy, to publications like Newsweek, to influencers like Deepak Chopra and Mark Cuban. Advertisers have included Microsoft, NBC, Universal, Bookrenter, Hautelook, Clicker, and Chartbeat. More importantly, Ad.ly is reporting average campaign CTR ranges from 1%-3.5% (Rad says that Ad.ly has seen CTRs that are far greater than 3.5%). Rad says that this performance is key when comparing to clickthrough rates for conventional display advertising, which he says is be around .19%.

Unfortunately, Rad did not release any numbers to indicate how much money was flowing through the platform through advertisers and publishers, but judging by the quality of the advertisers, I’m assuming the campaigns were significant. Rad won’t reveal how many campaigns the startup has run or the number of Tweets Ad.ly has sent out, but he did say that in January, Ad.ly sent out “thousands” of ad sponsored Tweets from publishers. 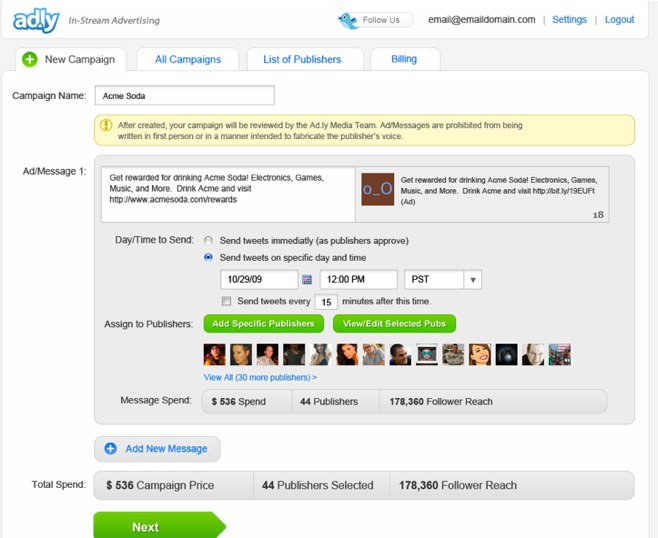