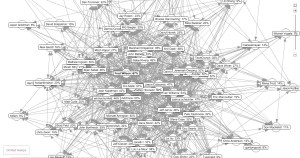 Here’s a good virtual parlor game. Pick any two or three Twitter users, and Twiangulate which friends or followers they have in common. Twiangulate is a site that shows the overlap between your social graph and any tow other people on Twitter. It shows the resulting names as a list or an interactive social map.

For instance, if you click on the image at right, you will see an enlarged version of a map I made to see who I follow in common with @fredwilson and @anildash. Fred Wilson follows 463 people, Anil follows 573, and I follow 315. Yet according to Twiangulate, we have 81 common “friends,” which perhaps says something about how insular the world of Web startups and social media can be. In contrast, Ashton Kutcher (@aplusk) and I only have 15 common “friends.”

So who are some of the people Fred, Anil, and I all listen to on Twitter? Some of the common people we follow include Josh Kopelman, Chris Dixon, John Borthwick, Dennis Crowley, Doc Searls, Steve Case, Joshua Schachter, Danny Sullivan, Bradley Horowitz, Michael Arrington, and Jeff Jarvis.

Are we listening to the right people or do we suffer from groupthink? Who do you overlap with the most on Twitter?