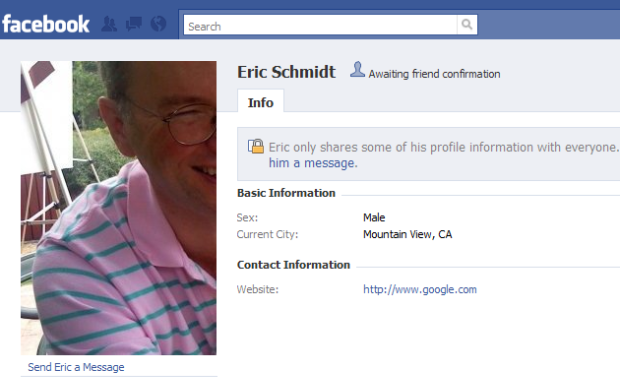 Some people are suggesting that Google CEO Eric Schmidt may have just created a Facebook profile for himself, after signing up for Twitter in early December 2009 and right on the heels of Microsoft founder Bill Gates setting up an account on the wildly popular social networking service.

Evidently, we can’t be 100% sure that this is his real account at this point – unlike Twitter, there’s no ‘verified account’ stamp for Facebook profiles and the man has yet to confirm our friendship (I forgive him, since it’s the middle of the night in the United States).

The information that is viewable is mostly restricted to his Facebook friends, as it shows only a profile picture, his sex (Male!), a website (Google.com!) and his location (Mountain View, CA!).

Nevertheless, my esteemed colleague MG Siegler says the mutual friends they have on the social network are all Googlers, so it is likely Schmidt (unless of course the Google employees were tricked into befriending a faker).

Update: further proof that it is him – the person who created the profile linked the email address EricSchmidt1@yahoo.com to the account, and that happens to be Schmidt’s personal email address too. (thanks, Stephen!)

Update 2: yes, that email address is publicized openly on Schmidt’s website, and no, I don’t know why he uses a Yahoo account (although I assume it’s an old account and I’m quite certain he also uses Gmail).

One thing is for sure: unlike on Twitter, Schmidt did not obtain a nice vanity URL for himself (facebook.com/ericschmidt has already been taken by someone else) and his profile picture paints a picture of a soft-spoken man in casual clothing rather than that of a bad-ass.

So do you think this is legit or not? And more importantly, are you going to try and befriend him so you can poke him all day?

(Thanks to @RomilPatel for the tip)