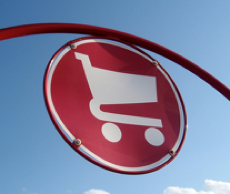 We’ve been covering the growth of  Meebo’s chat bar extensively since its launch: after a fairly slow ramp up in 2008, it’s since been deployed to 130 partner sites and now has a reach of 100 million unique visitors. Now that the company has landed partnerships with a number of large publisher sites and social networks, it’s settings its sights on a new target: shopping. The company has been approached by various online retailers to see how they could help make shopping sites more social, and now they’re making an effort to expand into the market.

From a functionality standpoint, Meebo isn’t changing much about the bar to suit retailers — you’ll still drag and drop items to share them with friends, and you can chat with buddies using integrated services like Google Talk, Facebook Chat, and AIM. The big differences will lie in the monetization strategy and the level of analytics retailers will be able to take advantage of.

Revenue from the Meebo Bar primarily revolves around the ad unit that appears at the far left side of the screen. So far, the company has been getting an interaction rate of around 1% (which is relatively high) with ads from major brands. But while these ads have been targeted to some extent, they haven’t typically been promoting products on the site the user is currently browsing.

With the tweaked Meebo bar, retailers will be able to promote their own sales, and brands can pay to promote certain items on the store. For example, if I was browsing Best Buy online and ran a search for “printer”, HP could run an ad pointing to their newest model (note: this is hypothetical, Best Buy isn’t a partner site). Meebo also intends to use ad retargeting across its various partner sites — if you ran that query for “camera” and later went to MyYearbook (which runs the Meebo bar), the bar might show you ads for cameras.

As with publisher sites, retailers will be able to tweak what meta data their shared items include on sites like Facebook and Twitter. So if I decided to share the printer from the example above with my friends, my shared item on Facebook could include its price and rating in the shared link, as opposed to the generic summary that’s usually produced. Meebo is also planning to release a real-time notifications API in the near future, which will let these retailers send out promotions to users as they’re browsing their sites.

At this point, Meebo’s roster of retail partners is small — the only partnership they’d confirm at this point is with ValueClick Brands, which is behind sites like smarter.com, couponmountain.com. But the company is currently in talks with some large online retailers.

Of course, turning shopping social is easier said than done. This isn’t a new idea — we’ve been covering sites trying to figure it out for years, some of which have failed. Competitors include Kaboodle, ThisNext, and plenty of others. Meebo may be able to rise above the rest because it will be directly integrated into these retailer sites, and won’t rely on a destination site or bookmarklet for sharing. That said, it’s going to have to convince these retailers that it’s worth their time and screen real estate to integrate the bar in the first place. 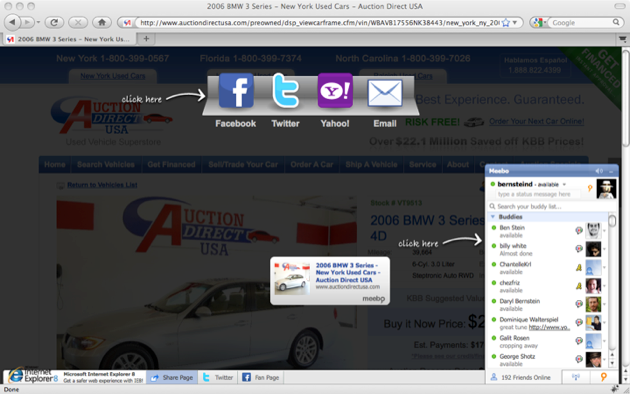