Last year, Yahoo still dominated display advertising on the Web in terms of sheer number of ad impressions on its properties, but social networking sites MySpace and Facebook came on strong. Some new data from comScore in its just-released 2009 U.S. Digital Year in Review ranks the top Web properties by the number of display ad impressions.

Yahoo served up an estimated 521 billion impressions last year, according to the report, followed by Fox Interactive Media (i.e. MySpace) with 368 billion, and Facebook with 330 billion. Microsoft sites (No.4) only served up 218 billion display ads, whereas Google (No. 6) served up only 70 billion. (These numbers do not include paid search text ads) 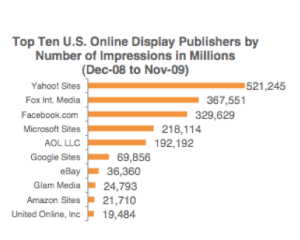 Obviously, the biggest sites with the most visitors serve up the most display ads. This year, Facebook doubled in size to the point where it is well past MySpace and catching up to Yahoo in audience size. It is already bigger than Yahoo in terms of pageviews.

Facebook has more advertising inventory than it knows what to do with, although not all of it is desirable. But Facebook is now selling all of its display ad inventory itself after it renegotiated its ad deal with Microsoft.

Biggest doesn’t mean most profitable. Facebook might be serving up more ads than almost anyone else, but they are still selling at very low ad rates because they perform poorly for the most part. If Facebook can figure out a way to make the ads on its site become more relevant and useful, it has a lot of room to boost its ad rates.

You can download the entire comScore report at this 2009 U.S. Digital Year in Reviewlink. 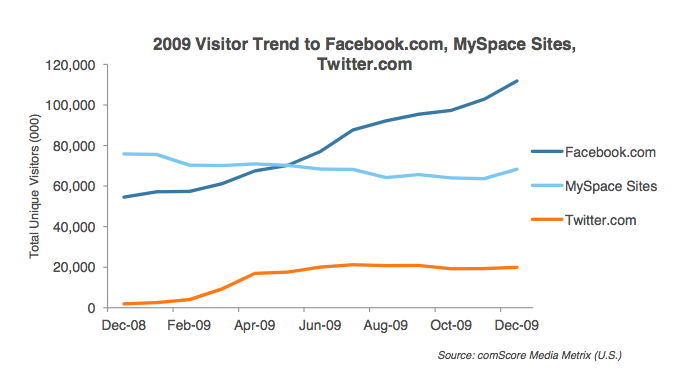