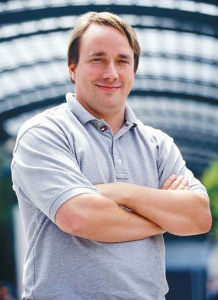 Since we all know that Android runs a modified version of Linux, you’d think that the creator of Linux, Linus Torvalds, would absolutely love Android handsets. Nope. As a matter of fact, the man hates cell phones. Torvalds says that he got the G1 when it came out but rarely used it because of his distaste for the distracting gadget. So why does he call the Nexus One a winner?

Unlike us phone geeks, Linus Torvalds doesn’t rush out to buy the latest and greatest when it hits the market. The Nexus One has been available for over a month and he has waited until now to take the plunge. Why? The Nexus One finally received a pinch-to-zoom or multitouch update last week. Torvalds says:

What a difference! I no longer feel like I’m dragging a phone with me “just in case” I would need to get in touch with somebody – now I’m having a useful (and admittedly pretty good-looking) gadget instead.

It appears that the addition of pinch-to-zoom, especially in Google Maps, helped Torvalds get over his hatred of cell phones. So there you have it. If you were on the fence about purchasing the Nexus One, the man who made Linux has given it his seal of approval.