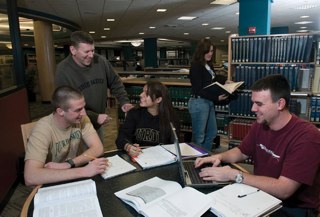 Ah, the college library photo. Look through any school’s brochure, and there’s a good chance you’ll see photos of an ethnically diverse group of students pouring over the same math problem together, all of of them inexplicably grinning ear to ear. It’s a nice thought, but unfortunately it doesn’t happen all that often — instead, many students wind up studying alone, and when they can’t figure something out, they’re out of luck. Now, entrepreneur Pooja Nath is looking to turn this kind of group learning into a reality for more students (at least online) with her startup Piazzza.

Piazzza is still in a private beta and has quite a ways to go before public launch, but we got a sneak peek at its current progress. The site is designed to help classmates share their questions and answers in a format that’s a bit like a mixture between a wiki and a forum. Each class gets its own hub for Q&A, and students can bookmark any questions if they’re also eager to find out the answer. Multiple students can contribute to each answer in a wiki style but there’s a version history that shows what each student wrote.

Students are free to independently create Piazzza hubs for their classes, but I suspect the site will get more traction if it gets professors to sign up. When a professor joins Piazzza, their answers are separated from the students’ to make them easier to find. And professors can also look to see which questions have been bookmarked by the most students to gauge which topics they should explain better in class. So far Piazzza has opened to around 600 students across 9 classes, and plans to open to around 50 classes in a few months. Initial response from professors has been quite positive. And I liked what I saw from the service, though I think it needs to build out some technology that would make it harder to reproduce. I also think that Piazzza will really need to get a large number of professors using the service, which will be difficult.

Nath says that Piazzza was inspired by her own personal experience. As a student studying computer science at India’s prestigious IIT Kanpur, she found herself to be one of only three female students in a class of fifty. She says she was a bit shy and never really got to know many of her classmates, so when it came time to study, she didn’t get to bounce ideas off her peers. After working at Oracle, Kosmix, and Facebook, she’s now a Stanford MBA student.